Novak Djokovic ′supported by all Serbians′ but reputation takes a hit in the Balkans | Sports | German football and major international sports news | DW | 06.01.2022

As Novak Djokovic fights deportation from Australia, he has found support from Serbia's president and some parts of the country's media. But support for the tennis star is far from universal — in the Balkans and beyond. 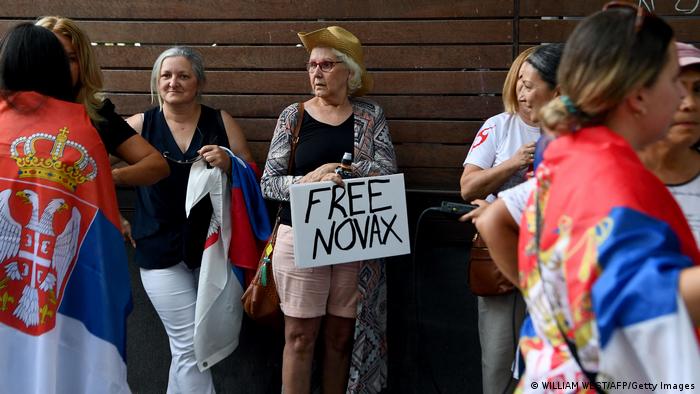 There isn't much for Novak Djokovic to do but wait. The world's no. 1 tennis player is being held at an "immigration hotel" in the inner Melbourne suburb of Carlton as he awaits a January 10 court hearing over Australia's decision to cancel his visa and deport him.

The unglamorous surroundings of the Park Hotel, a place known more for detaining refugees than hosting an elite sportsman, is a far cry from the optimistic tone of Djokovic's final Instagram post before boarding a flight from Dubai to Melbourne on January 4, when his nightmare began. "Let's go 2022" hasn't aged well.

Adorned with Serbian flags, Djokovic loyalists have flocked to support the reigning Australian Open champion outside his temporary residence, bucking the overall trend and overwhelming view of public opinion — in Australia and beyond — that vaccine skeptic Djokovic is deserving of little sympathy.

After all, Australians have endured longer and harsher lockdowns than any other country during the COVID-19 pandemic, with full vaccination mandated in the majority of Melbourne workplaces.

'All of Serbia' is behind Djokovic

The view in Serbia is markedly different though, at least according to the country's president Aleksandar Vucic. After speaking with Djokovic by phone, Vucic took the opportunity to speak for "all of Serbia," decrying the "harassment" of the world's best tennis player.

"I just finished a phone conversation with Novak Djokovic," the Serbian president wrote on Instagram. "I told our Novak that all of Serbia is behind him and that our authorities are taking all measures to stop the harassment of the best tennis player in the world in the shortest possible time. In accordance with all norms of international public law, Serbia will fight for Novak Djokovic, for justice and truth."

Elsewhere, the Serbian website of the Russian foreign media provider Sputnik has claimed to know Australia's rules better than Australia, opining that "although Djokovic didn't break any rules, on the contrary he kept to all the rules, there were a number of unfounded attacks [against him] by the media and even Australian statesmen."

Australian Prime Minister Scott Morrison, however, has always been clear: "Rules are rules."

'The donkey is not vaccinated'

Djokovic hasn't enjoyed such blanket support from the rest of the Balkans, though. Croatia and Bosnia — both countries to whom Djokovic has donated generously, particularly after the deadly flooding of the Sava River in 2014 — have laid the blame at Djokovic's door.

Serbian politician Nenad Canak went a step further, emphatically denying any notion that Djokovic has been treated differently because of his Serbian nationality. "There is no bad treatment [for Djokovic] because he is Serb, but because the donkey is not vaccinated," Canak tweeted succinctly.

A similar tone was struck by Aleksandar Stankovic of the state Croatian Radio and Television (HRT), one of the best-known and most influential journalists in Croatia and the Western Balkans region. He commented on Djokovic's stance on the coronavirus vaccination on Facebook: "A top athlete who makes an idiot of himself. There's strong competition, but one in particular is trying hard at the moment." 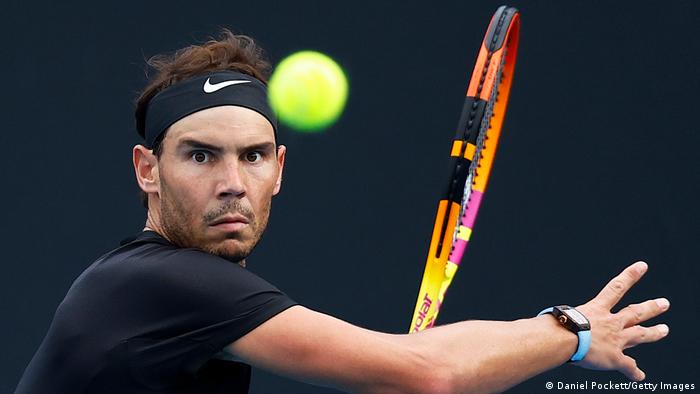 'He knew the conditions many months ago, so he makes his own decision'— Rafael Nadal

There was little in the way of sympathy from Djokovic's long-time friend and rival Rafael Nadal, either. When asked about the situation during the warmup Melbourne Summer Set tournament earlier this week, Nadal stressed the importance of being vaccinated and that the rules are the same for everybody: no vaccination, no entry.

"I believe in what the people who know about medicine say, and if the people say that we need to get vaccinated, we need to get the vaccine," Nadal said. "In some way I feel sorry for him. But at the same time, he knew the conditions many months ago, so he makes his own decision."

Correction: Nenad Canak was initially referred to in this article as a Bosnian politician. He is, in fact, Serbian. DW's apologizes for the error.