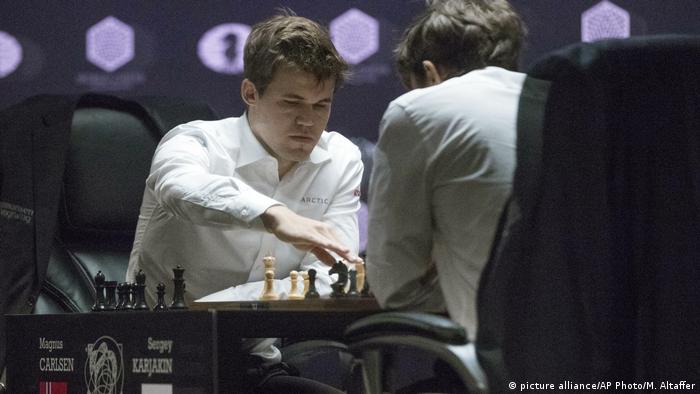 Norwegian grandmaster Magnus Carlsen defended his title as the best chess player in the world, defeating Russian challenger Sergey Karjakin in tie-breakers on Wednesday. This is Carlsen's third consecutive championship.

The defending champion, who turned 26 while playing in Wednesday's championship, only required a draw in the final quick fire tie-breaker to win the title. As time ran down, Karjakin could not keep up, keeping Carlsen on the throne.

After the match, Carlsen was treated to a rendition of "Happy Birthday," and Karjakin wished the champion a happy birthday as well.

Carlsen, born in Tonsberg, Norway, was a child prodigy and has been on the chess scene for much of his life. With his aggressive style of play, Carlsen drew against Russian legend Gary Kasparov, then ranked number 1 in the world, in a rapid event in 2004 at the age of 13. Washington Post reporter Lubomir Kavalek soon dubbed Carlsen the"Mozart of chess" after watching Carlsen play.

But the young Norwegian soon ran into trouble against elite players until he learned to bring his aggressive style of play under control. In 2010, he achieved the ranking of world number one and has stayed there since September 2011.

Carlsen won his first World Championship in 2013 and has held the title ever since. He has also modeled for the G-Star Raw clothing brand and been the subject of two documentaries.

Karjakin, also 26-years-old, was also a child prodigy. Born in Simferopol in Crimea, he became the youngest ever grandmaster at 12 years and 7 months, a record that still stands.

Karjakin has often stood in Carlsen's shadow, but the Russian has also triumphed at times over the world's top player. Karjakin won the 2012 World Rapid Championship ahead of Carlsen, and he won the Norway Chess Tournament in 2013 and 2014, beating out Carlsen once again.

Karjakin dismayed some in Ukraine after deciding to play for Russia, as well as becoming a Russian national in 2009.

The World Chess Championship in New York is not just about who will win. The organizers are hoping it will help establish chess as a major Internet-pasttime. (25.11.2016)

After ending all square, the World Chess Championship goes into 'extra-time'

The 12th game of the World Chess Championship between defending champion Magnus Carlsen and challenger Sergej Karjakin has ended in another draw. At six games each, the match will decided by a rapid chess tie-break. (29.11.2016)

The "Mozart of Chess"

Uzbekistan's men have won chess' most prestigious international team tournament in Chennai, fending off stiff competition from India's B team and Armenia. Ukraine won the women's event, ahead of Georgia and India.

The 1972 World Chess Championship saw Bobby Fischer of the US challenge the Soviet Union's Boris Spassky. Fifty years later, the "Match of the Century" lives on.