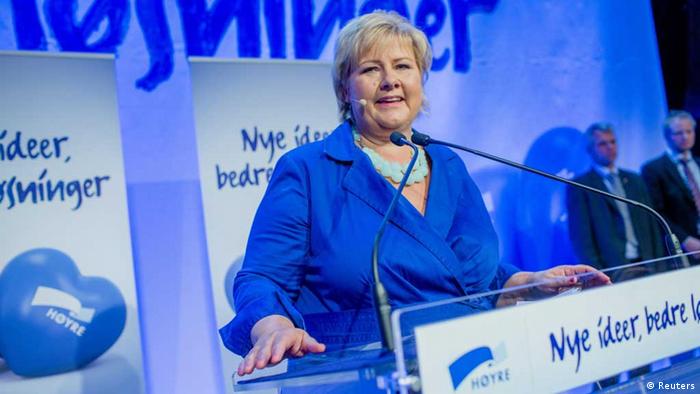 With three quarters of votes counted, a bloc of four center-right parties had won 96 of 169 seats in parliament. Prime Minister Stoltenberg's three-party coalition won 72, compared to the 86 they had in the outgoing parliament.

Stoltenberg, who has led Norway for eight years, conceded defeat late in the day, saying his Labuor Party tried "to do what almost no one has done, to win three elections in a row, but it turned out to be tough."

"In accordance with Norwegian parliamentary tradition, I will seek the resignation of my government after the presentation of the national budget on October 14, when it's clear that there is a parliamentary basis for a new government."

"Today the voters have produced a historic election victory for the right-wing parties," she told supporters in Norway's capital, Oslo.

Talks must now begin to decide the exact makeup of a center-right government. Solberg is expected to begin negotiations with the anti-immigration Progress Party, which came out on Monday as Norway's third-strongest party.

Solberg is also expected to approach the Liberal Party and the Christian Democrats, without whom, preliminary results suggest she will be unable to form a majority government. At the very least, she would need their support should she wish to run a minority government with the Progress Party.

The Progress Party's right-wing stances might dissuade the smaller Christian Democrats and Liberals from joining a potential coalition government, or alternatively lead to a difficult union of all four parties.

Anders Behring Breivik, who killed 77 people in attacks on two sites tied to the Labor Party two years ago, was once a member of the Progress Party. He left saying the party was too soft.