North Korea′s policy of secrecy keeps national soccer under wraps | World | Breaking news and perspectives from around the globe | DW | 17.06.2010

North Korea's reputation for secrecy and control is well known. It seems that no area of North Korean life is spared the close attention of the communist regime - not even the country's soccer structure. 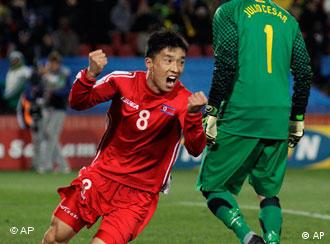 For the Glorious Leader: Ji Yum Nam scores against Brazil

One of the few stories which have come out of the highly secretive North Korean camp at the 2010 World Cup in South Africa epitomises the isolation which those who live in the oppressive Communist state experience every day.

Reaching only their second-ever World Cup finals may have been reason enough for wide-eyed wonderment within the squad but the biggest gasp of excitement and surprise allegedly came when Jong Tae Se - the man knows as the Asian Wayne Rooney - took out his mobile phone.

Jong, one of only three North Koreans who play their football outside of the country, regularly provides the rest of the squad a brief glimpse of the modern, mostly Western world which remains a mystery to his team mates. The striker, who plays his football with Kawasaki Frontale in Japan's J-League, is as close to a Western superstar soccer player as it’s possible to get in North Korea, laden as he is with iPods, silver Hummers and endorsement deals.

However, it is only his status and huge popularity which prevents him from being made an example of. State officials in North Korea are reportedly unhappy with his love of Western culture and all its trappings and are said to be concerned over what his image represents to his fans back home. The nationalised North Korean, born in Japan to South Korean parents, has also been accused by the state of "not being Korean enough."

Image, just as everything else surrounding North Korean soccer, is monitored closely by the state. North Korea's Communist regime, as you would expect, has considerable control over all aspects of its football team, its players and its domestic league system.

As befitting such a secretive, authoritarian regime, information on the details of North Korea's soccer set-up is sketchy at best but John Duerden, the Asia editor at Goal.com, and Scott McIntyre, the Asian soccer expert at Australian broadcaster SBS, provided some insight. 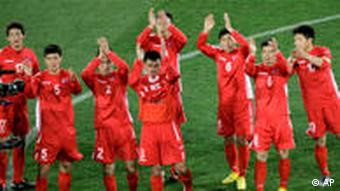 The national team is effectively run by the regime

"The North Korean government and the Communist Party control the North Korean Football Association so control of the national team is total," Duerden told Deutsche Welle. "It is the party that hires and fires coaches."

"As for the domestic set-up, there isn't much of a league to speak of," he added. "It is based on amateur or military lines. The country's domestic clubs such as Pyongyang City, Amrokgang or 25 April only play each other and don’t participate in Asian continental competitions. The standard of the game, the facilities and attendances are pretty low throughout."

"Everything is controlled by the government," said McIntyre. "Saying that, apart from the national team which is completely under the power of the authorities, the league is just a series of low-level kickabouts in comparison. The games which are played on the national holidays, in celebration of the party and the nation, they're more important to the people than the league system. That's where you get the big crowds." 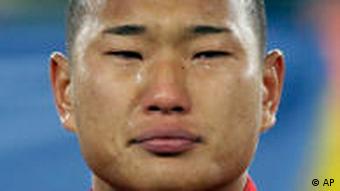 Few players have left North Korea to play overseas. Along with Jong Tae Se, only national team players An Yong Hak, the 21-year-old midfielder from Omiya Ardija in Japan, and Hong Yong Jo, the 28-year-old forward from Russian side Rostov, play abroad.

"The two guys who play in Japan are effectively Japanese," said Scott McIntyre. "They only ever go to Pyongyang to play internationals so they're special cases. Hong is the only North Korean who plays abroad - and he has a minder with him in Russia all the time."

"There isn't any political policy which prevents them playing in other countries, it's mainly because nobody knows about them and that they're not on the international radar. Perhaps the World Cup will change this."

John Duerden agrees: "Some of the players - like Jong Tae Se - are born overseas, which makes it easier for them to play for clubs outside of North Korea. The government is actually encouraging more and more players to play abroad however and you may see a few developments after this World Cup."

For the happiness of the Glorious Leader

Playing in North Korea and representing the country at international level certainly means as much to the North Korean players as it does for everyone else at the World Cup - but few teams will have the happiness of their country's leader in mind as one of their main objectives in South Africa. 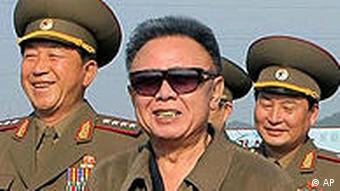 "Perhaps there is no other team in the world who would be fighting with the same dedication to please the leader and to bring fame to their motherland," said coach Kim Jong-Hun in one of the sporadic and brief press conferences given by the North Korean team.

While the players naturally want to honor their country by putting on a good performance at the World Cup, observers feel that there is also a certain amount of fear mixed in with their dedication.

North Korea's greatest World Cup moment came when they produced a shock 1-0 win over much-fancied Italy at the 1966 tournament which saw them progress from their group.

Rumours of incarceration for failure

However, after celebrating such a magnificent result wildly, the North Korean challenge soon faded with Pyongyang blaming their failure on the nature of the team's celebrations, calling its behaviour "bourgeois, reactionary, corrupted by imperialism and bad ideas." According to some reports from dissidents outside of North Korea, it is alleged that the whole team, upon its arrival back in North Korea, was punished with a stint in one of the country's gulags. 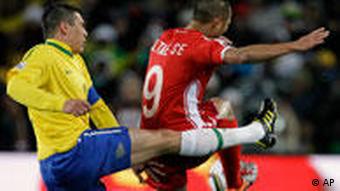 Despite losing to Brazil, it's unlikely the players will be punished

With qualification for South Africa apparently due to "the experienced and tested leadership of General Secretary Kim Jong-il" and his "great patriotic devotion which is the source of all victories, miracles and inexhaustible strength," the pressure on the 2010 World Cup team to do well will be immense - but surely in the 21st Century even North Korea won't punish failure at the World Cup with imprisonment and hard labour?

"There are always rumors but they are never verified," said John Duerden. "For results on the football pitch, any punishment is very unlikely in my opinion. If a player was thought to have engaged in anti-North Korea activity then that would probably be different but nobody really knows for sure."

Blanket of secrecy over World Cup base

The North Koreans arrived at the World Cup in trademark secrecy, causing controversy on arrival by accepting an invitation to base themselves in Zimbabwe - the only one of the 32 teams to do so.

The team's base is highly secure with training sessions - open to the public at every other World Cup base - conducted away from prying eyes. Players and coaches are rarely made available to the media and unsolicited visits by reporters have been banned. While most of the other nations have arrived with a large national press entourage, North Korea have brought just two photographers, two TV reporters and one writer from the state-controlled media.

"You have to accept that this is a very secretive country," said John Duerden. "I don't think the way the team is protected and media rebuffed is done on purpose at the World Cup but the nation has so little experience of the foreign media, it just doesn't know how to deal with it." 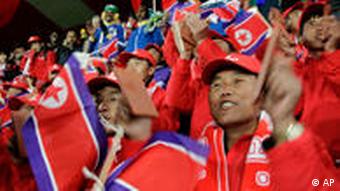 Hand-picked North Korean fans celebrate when told to do so

Even the support seems to be organized and controlled by Pyongyang. At the opening Group G game against Brazil on Tuesday night, around 300 North Korean supporters were in attendance, all dressed in identical red shirts, jackets and scarves, wearing identical red caps and waving small North Korean flags.

Apart from an impassioned rendition of the national anthem, they sat impassively throughout the game, only reacting to the action on the pitch when instructed to do so by a similarly dressed North Korean official.

According to a report in the LA Times, one of the North Korean fans admitted to a reporter that the fans had been carefully handpicked by the North Korean government to attend the finals, that they didn't know each other beforehand and would stay in South Africa only as long as the national team remained in the competition.

"If the supporters are from North Korea itself then they will be hand-picked," said John Duerden. "North Korea has past form for doing this and did the same at the 2003 Universiade which was held in Daegu, South Korea. North Korean supporters from Japan or China, however, would likely not be hand-picked."

Brazil overcame a solid North Korean defense to win in the debut of the so-called 'Group of Death.' Group mates Ivory Coast and Portugal finished scoreless, while a late New Zealand goal saved a point against Slovakia. (15.06.2010)

While nobody will admit to arriving at the World Cup just to make up the numbers, the realists among the 32 nations competing will know that it's highly unlikely that they'll get out of the group stages. (15.06.2010)

'Group of Death' promises to deliver no shortage of curiosities

Mix the world's best footballing nation, two perennial pretenders and one absolute mystery, and what do you get? Group G. And though Brazil are favored, no one knows what the table will look like in the end. (15.06.2010)