Thousands of North Koreans have gathered to commemorate their ex-ruler Kim Jong Il on the eve of the anniversary of his death. The country has also been celebrating the successful launch of a long-range rocket. 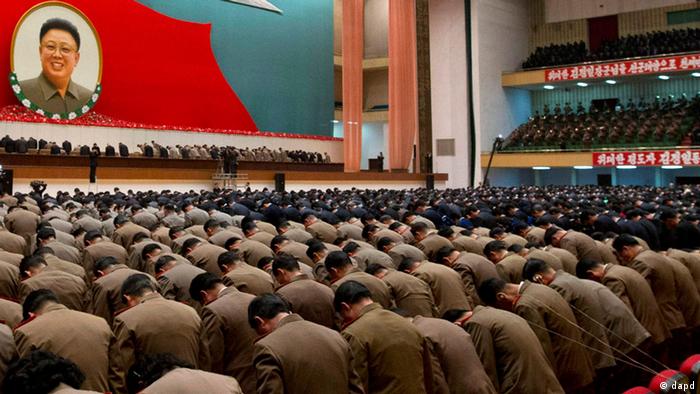 The memorial comes just days after North Korea successfully launched a long-range rocket into space, which they celebrated with a two-day rally.

North Korea's top leadership is calling the successful launch on Wednesday proof that Kim Jong Un has the strength to lead the country one year after his father's death. North Korea claims the rocket launch was a weather satellite, however many countries have condemned the launch as a ballistic missile test, which would be a violation of a number of United Nations Security Council resolutions.

South Korea is calling for swift action against North Korea, which has successfully launched a rocket into space and put a satellite in orbit. Seoul views the launch as a provocation and threat to regional security. (12.12.2012)

The Security Council was among those who condemned the launch, saying its members "will continue consultations on an appropriate response."

Kim Jong Il died on Dec. 17, 2011 after ruling the communist state for 17 years. His youngest son, Kim Jong Un immediately took over after his death, the second dynastic succession by the Kim family which has ruled the isolated country for more than six decades.

A reporter for the Associated Press was among a handful of foreign and local journalists allowed to cover the closed meeting, which marked the start of events to commemorate the elder Kim's death.

"The heart of the great leader stopped beating but Comrade Kim Jong Il lives with us forever... to give blessings for the bright future of our people," the ceremonial head of state Kim Yong Nam said in a speech.

"The successful launch of our Kwangmyongsong 2 satellite is also another victory achieved by our military and people, by faithfully following the teachings of the great leader (Kim Jong Il)," he said.

It was unclear what memorial events were scheduled for Monday, the anniversary day.