Just days before planned talks with the US, Pyongyang said it had successfully tested a new missile. North Korea's neighbors criticized the launch. 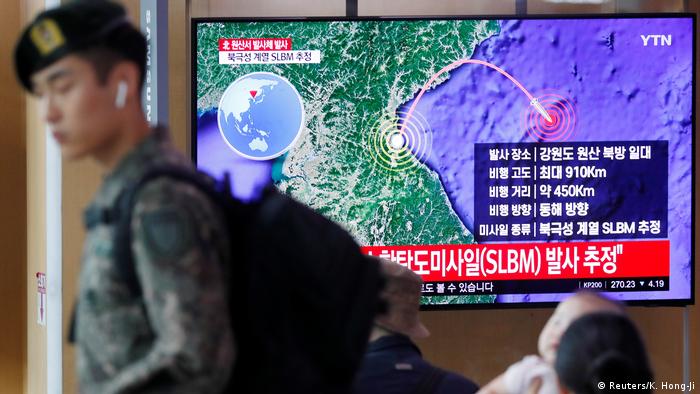 North Korea said on Thursday it had carried out a successful test of a new type of submarine-launched ballistic missile, state media reported.

"The new-type ballistic missile was fired in vertical mode," on Wednesday in the waters off Wonsan Bay, the Korean Central News Agency (KCNA) reported.

KCNA identified the tested ballistic missile as a Pukguksong-3 and said it was fired in "vertical mode" from the waters off Wonsan Bay in the East Sea, also known as the Sea of Japan. 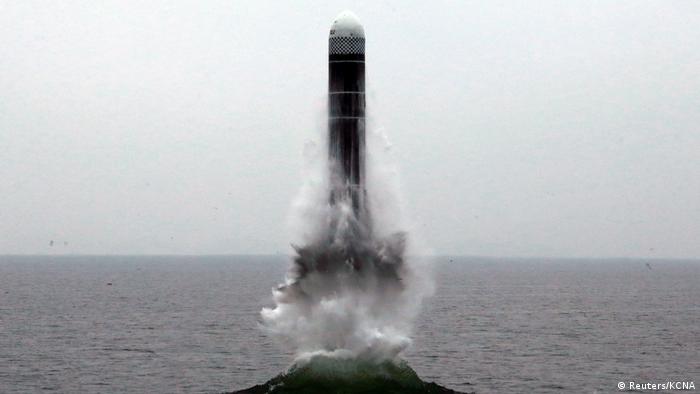 KCNA released a photo of what appeared to be a missile launched from a submarine.

North Korean leader Kim Jong Un sent "warm congratulations" to the research units involved in the launch, adding that it had "no adverse impact on the security of neighboring countries," KCNA reported.

The test comes just days before Washington and Pyongyang are scheduled to resume denuclearization talks, which had been stalled for months.

Japan confirmed that a ballistic missile had fallen in its territorial waters and condemned the launch.

"We will do the utmost to protect the safety of the people and stay on high alert while coordinating with the United States and the international community," he added.

South Korea's Joint Chiefs of Staff (JSC) said it had detected a ballistic missile fired in an easterly direction from the sea.

The JSC said Pyongyang’s missile launches were "not helpful to efforts to ease tensions on the Korean peninsula and we urge North Korea again to stop immediately."

North Korean and US officials have both said the first talks since February could take place sometime next week. Soon after the announcement, South Korea's military said North Korea launched "unidentified projectiles." (02.10.2019)

Despite facing an acute food shortage, North Korea has said it wants a reduction in UN aid, claiming "hostile forces" have made aid programs ineffective. According to the UN, over 40% of North Koreans are undernourished. (06.09.2019)

Some of the 880 people on the government's list of missing Japanese may not have been seized by North Korea – but Tokyo will continue to demand the release of those it has evidence were taken. Julian Ryall reports. (17.09.2019)