North Korea feels it is 'being provoked'

North Korea's threats of war have reached a new stage. Political expert August Pradetto explains why Kim Jong-Un is out to demonstrate his power, and how the US may respond. 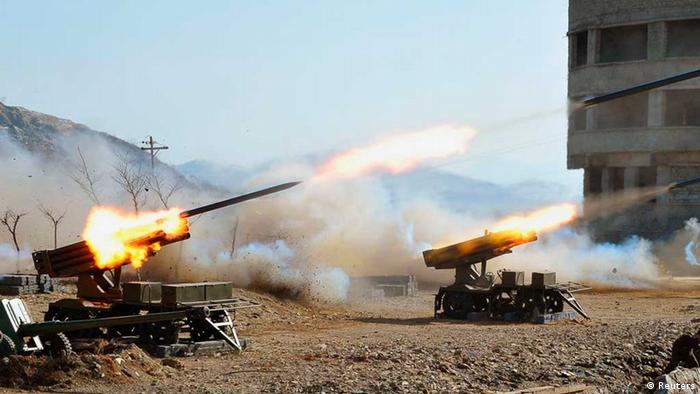 DW: North Korea says it is now in a state of war with South Korea. What will change as a result? After all, the two countries have not had a peace treaty since the end of the Korean War.

August Pradetto: In principle, that will change little about the military and political situation because South Korea, combined with the USA, stands head and shoulders above North Korean forces. North Korea feels provoked by the large-scale maneuvers currently being carried out in South Korea and in the East China Sea, and this is the North Korean government's reaction to that maneuver. It has a function relating to domestic politics, but it is also intended to demonstrate to those outside the country: We are going to do something against these maneuvers - we're standing up for ourselves, even though Pyongyang has little chance of adequately responding militarily in any form.

You mentioned that entering a state of war also has a purpose domestically. How so? 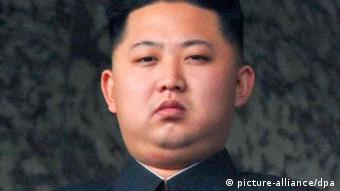 Kim Jong-Un assumed power in North Korea one year ago

North Korean leader Kim Jong-Un has now been in power for more than a year. As a young successor to his father's role, he has to prove himself - and he's apparently trying to do so with strong words.

The strong words against Americans and against the South Korean government are intended to cause him to be recognized as the guardian and protector of the North Korean nation.

Will that work on his countrymen?

We must not forget that North Korea is a totalitarian state that has the entire media under its control. What the North Korean media propagate is what's seen, heard and experienced there. There are relatively few reports and hardly any objective reporting from abroad that enter the country. People are dependent on domestic media. Other sorts of reports come only from China. And they're hardly suitable for influencing the North Korean public in any significant way.

North Korean leaders have again and again felt provoked by American and South Korean military maneuvers. Has that taken on new dimensions, or is it saber -attling like what always happens?

The big danger is that something unintended occurs from both sides. The majority of the maneuvers will soon be over. Presumably the situation will settle thereafter, if there are no incidents during the intervening period.

Can the US and South Korea do something to contribute there? For example, by acting in a more restrained way. 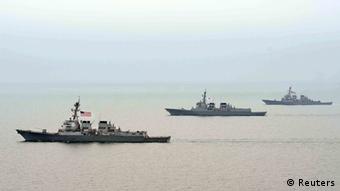 South Korea and the US regularly conduct maritime maneuvers

That would be one possibility. The US has done little to calm the situation. In fact, the US is itself under pressure with its bases in Japan and South Korea. These bases are not uncontroversial among the respective countries' citizens.

At the same time, the US wants to fortify its bases in the Pacific region, particularly in South Korea and also in Japan, as well as build up its missile defense systems. The North Korean reaction to these maneuvers certainly isn't coming at an inopportune time for the US in terms of strengthening the American position and legitimizing its plans.

So that means both countries want to offer shows of strength.

Both countries want to maintain their position in the region. North Korea fears that what has been on the US agenda since 2001 - namely a regime change in North Korea - could potentially be carried out with military means. And the US is trying to expand its position in the Pacific. And this is the real back story to the rhetoric offered from both sides as well as the strategy both sides are employing.

August Pradetto is a professor of political science at Germany's University of the Federal Armed Forces Hamburg.

China has become more open than ever about its policy regarding North Korea. While some want a change of course as China seeks to keep instability from its door, others think the status quo should be preserved. (27.03.2013)

North Korean leader Kim Jong Un has promised reforms of the country's command economy. But the move is less about prosperity for all and more about solidifying the Kim dynasty. (25.03.2013)