Two scientists at the University of Manchester share the prize of over one million euros for their extraordinary work on experimenting with graphene, the thinnest and strongest material known. 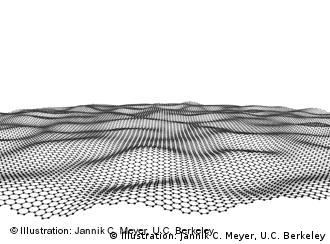 Graphene could be used to create improved transparent touch screens

The 2010 Nobel Prize for physics has been awarded to two European scientists, Andre Geim of the Netherlands and Russian-British national Konstantin Novoselov, for their pioneering work on graphene, an atom-thick form of carbon which is expected to play a large role in electronics.

The Royal Swedish Academy of Sciences awarded the prize to the pair for their "groundbreaking experiments regarding the two-dimensional material graphene," according to a statement released on Tuesday. Graphene is both the thinnest and strongest material known: almost completely transparent yet so dense that not even the smallest gas atom can pass through it.

Geim, 51, and Novoselov, 36, who are both Russian-born and based at Manchester University in the United Kingdom, were able to isolate graphene for the first time by extracting it from a piece of graphite like that found in ordinary pencils.

The Nobel committee said experiments with graphene could lead to the development of new material and the manufacture of innovative electronics, and that one possible application of the winners' work could be in researching new ways to trace dangerous gases.

"Since it is practically transparent and a good conductor, graphene is suitable for producing transparent touch screens, light panels and maybe even solar cells," the academy said in a statement. 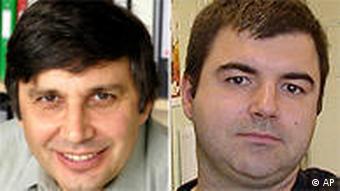 Geim says 'no change' in schedule after award

Novoselov is one of the youngest Nobel Laureates for physics ever. In 1973, Brian David Josephson, a British scientist, shared the prize at the age of 33.

Geim told press he who had been answering emails when he was informed of the win. He said one of his first thoughts was: "Oh dear – I will not win many other prizes."

According to the Nobel Prize's official Twitter account, Geim did not expect to win the award this year, and added: "He plans to go back to work today, no changes in today's schedule!"

Previously, Geim was awarded an Ig Nobel award – an American humorous science prize – in 2000 for having conducted research into diamagnetic levitation, which resulted in levitating a frog.

The Nobel Prize includes 10 million Swedish kronor (just over 1 million euros, or $1.5 million), to be shared between the two winners.

The 2010 Nobel Prize for Physiology or Medicine has been won by British physiologist, Robert Edwards for his work in the field of in vitro fertilization. (04.10.2010)

As the Nobel ceremony takes place in Stockholm, here's more on Tanzanian novelist Abdulrazak Gurnah's works, which explore the effects of colonialism and the fate of refugees.

The 2021 Nobel Prize in Physics has been awarded jointly to Syukuro Manabe, Klaus Hasselmann and Giorgio Parisi for "groundbreaking contributions to our understanding of complex physical systems."