No charges against police officer in "chokehold death"

A New York grand jury has decided a white police officer will not be indicted over the "chokehold death" of an unarmed black man. Daniel Pantaleo is to face no charges in connection with the incident. 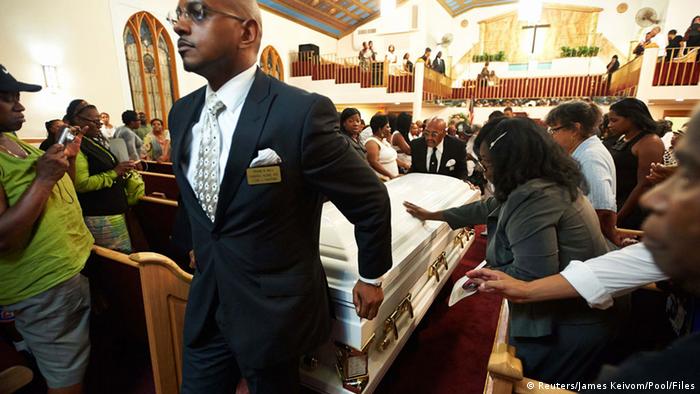 A grand jury in the New York City borough of Staten Island decided against criminal charges for police officer Daniel Pantaleo over the death of unarmed black man, Eric Garner, in the summer.

Garner died as the police tried to arrest him for illegally selling loose cigarettes. A white police officer, Pantaleo was implicated in the use of a chokehold grip on the suspect at the time of the arrest.

The fatal incident on July 17 was captured on film and the footage quickly spread across the Internet, sparking debates about the use of excessive force by the police, particularly against minorities.

The video was shot by an onlooker and showed the 43-year-old telling a group of police officers to leave him alone as they tried to arrest him.

It's reported Garner, who had asthma, could be heard saying, "I can't breathe!" during the incident. He later died in hospital.

Police union officials and Pantaleo's lawyer argued that the officer used a takedown move taught by the force, and not a chokehold, because Garner was resisting arrest, and that his poor health was the main reason he died.

His death was ruled as a homicide by the city medical examiner, who said police officers killed him by compressing his neck and chest. His health problems, including asthma and obesity, were contributing factors, the medical examiner said.

Wednesday's announcement on the Garner case came in the wake of a grand jury ruling last week not to charge the white police officer involved in the fatal shooting of unarmed black teenager, Michael Brown.

Garner's death also drew comparisons with the police shooting of the 18-year-old in the town of Ferguson, in the US state of Missouri.

He was shot and killed by Ferguson officer Darren Wilson on August 9. Wilson told the grand jury he fired because he believed his life was in danger, but some witnesses said the teenager was trying to surrender. 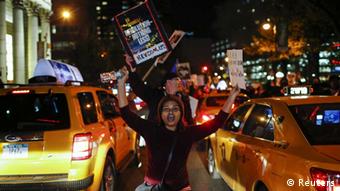 Protesters took to the streets of New York after the Ferguson grand jury ruling, November 2014

Earlier this week, New York Mayor Bill de Blasio said that the authorities needed to address the "underlying reality" highlighted by the deaths of both Michael Brown in Ferguson and Eric Garner in New York.

Darren Wilson, the white police officer who shot dead unarmed black teenager Michael Brown in August, has resigned from the Ferguson police force. Brown's death sparked protests and violence across the US. (30.11.2014)

WHO: Poorer nations to get first 40 million vaccines next month 1h ago

US to review Afghan peace deal with Taliban 1h ago