Ahead of the G20 summit in Hamburg, 32 journalists had their accreditation revoked at short notice as authorities cited security concerns. The journalists have called the move unlawful. 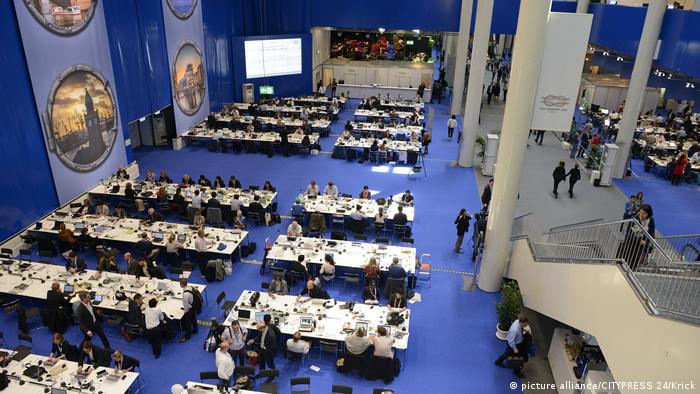 Nine of the journalists who had their accreditation revoked ahead of last month's Group of 20 summit in Hamburg will take Germany's Federal Press Office (BPA) to court, complaining that the move was unlawful.

However, the applicants had yet to submit their arguments to the administrative court in Berlin, a speaker for the court said on Thursday. The Press Office will then have the opportunity to respond to the allegations in writing. Only then can a formal hearing take place, which is unlikely to happen before next year.

The director of the German Journalists Union (DJU), business journalist Cornelia Hass, said neither the Federal Criminal Police Office (BKA) nor the BPA had provided any valid reasons for blacklisting the journalists.

"Now the court must determine whether the handling of our members holds up under legal examination," she said. "I have reason to be doubtful."

The press passes would have granted the 32 reporters affected access to restricted areas around the northern German city of Hamburg, as well as to the G20 press center, where summit press conferences were held. However, they had their access withdrawn after their names appeared on a list distributed by the BKA to police officers monitoring the entrances of the summit. Authorities have only cited security concerns for barring the reporters.

Nine reporters were forced to return their passes, including one freelance reporter from German weekly Der Spiegel and a photographer for the Weser Kurier newspaper. The other 23 journalists had not yet arrived at the press center to pick up their passes.

A spokesperson for the BPA told DW that none of the accreditations had been refused due to security reasons ahead of the summit. On July 6, just a day ahead of the summit, was there a reassessment of the security situation, which found "new developments around the summit and factors within the press center."

Following consultation with the BKA, the Federal Press Office then opted to blacklist the 32 journalists.

According to the BKA, among the barred reporters were convicted left-wing extremists and even one person suspected of being part of the "Reichsbürger" movement, a loosely organized collective of individuals who refuse to recognize the Federal Republic of Germany.

However, the move prompted rebuke and speculation, with the German government even being accused of bowing to foreign pressure. The federal government rejected those criticisms, saying it acted on its own information.

The Federal Interior Ministry and Press Office said they had explained to each of the 32 journalists the reason for their decision. No further information had yet been publically disclosed.