The Nigerian military appears to lack both resources and a clear strategy in the fight against Boko Haram. Reports that 500 soldiers had fled across the border into Cameroon have been denied. 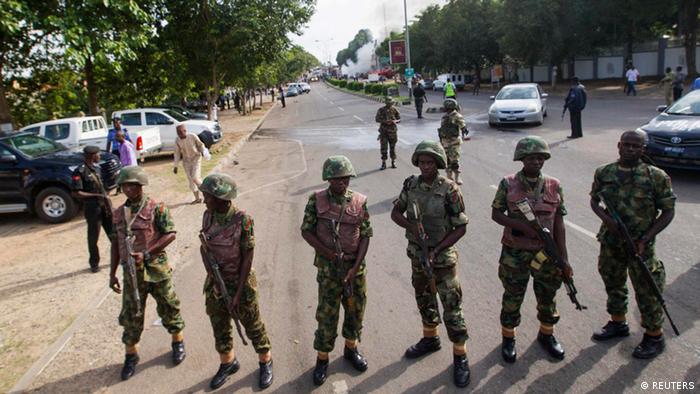 DW: Henry Wilkinson, it would appear that the Nigerian army is in a state of considerable disarray. Are they losing the battle against Boko Haram?

Henry Wilkinson: I certainly don't think they are winning in any way the battle against Boko Haram. There are clearly some very serious issues at play. There's been a lot of reports of small scale mutinies, of soldiers refusing to follow orders and tackle the group. There have been allegations of corruption and even collusion of officers, even selling weapons to Boko Haram. So I think, against this picture, the government has got to ask some very serious questions about whether the military is really up to the task. It certainly appears that, at this stage, it is not.

You mentioned mutinies and there have also been reports about soldiers' wives protesting against their husbands being sent to fight against Boko Haram militants. How long can the Nigerian military resist this sort of pressure from within?

Clearly there are very significant issues that need to be addressed. I think the first one is that these soldiers are encountering pretty frequent attacks from Boko Haram. They clearly need more resources. They need a clearer strategy – there's quite a lot of evidence to suggest that the way they are tackling Boko Haram has been a very imprecise counter-insurgency campaign that has been very heavy handed and has resulted in displacement. They are sustaining losses. Boko Haram appears to be very well equipped and maintained so there are also questions as to whether the Nigerian military really has adequate training and leadership for this kind of counter-insurgency and whether it has the resources it would require to defeat an organization that is becoming very militarily capable.

Nigeria is now Africa's strongest economy, yet its military – from what you have been saying – clearly has structural weaknesses. How could they be rectified?

I think one of the most important things, in terms of Nigeria getting a grip on its military, is to undertake deep reforms. This is tied to the political reforms that are required. Corruption is evidently an issue, as it is in Nigerian politics. It's a fairly well established idea that the military tends to reflect the state and the society from which it comes. And I think the state of the Nigerian military that we are seeing is symptomatic of a political dysfunction. So, where does the reform start? It really comes from central government and I think that is where we need to look to see whether the government is able to (a) exact the reforms required and (b) even recognize that there is a problem. I think that the government seems to be reluctant to concede that it needs help in certain areas.

But in July President Goodluck Jonathan sought parliamentary approval to borrow a billion dollars (758 million euros) for the upgrade of equipment, training and logistics. Isn't that going to go some way towards solving the problem?

Well money certainly helps but the problem is, when you have this level of investment coming in, you need to know exactly where it is being spent and that it is being spent properly. As I indicated earlier, there have been reports of corruption. Corruption is an endemic issue in Nigeria – is there any assurance that the equipment is going to be adequate for the task? Who is buying it? What purpose does it have? Just throwing money at the problem is not enough, you need a complete solution and a complete strategy to think about what is required and how it is going to be executed. Money by itself is not enough.

There are allegations that there are elements within the Nigerian military that have been collaborating with Boko Haram. How much significance do you attach to such reports?

It is clearly a matter of serious concern that this is happening but I am sure this is not an isolated incident. Diversion of weapons supplies to rebel groups from military stocks is perhaps the most common form of weapons trafficking now in Africa. I think that in itself is potentially significant but I wouldn't overstate the issue.

Is Nigeria's territorial integrity under threat?

Its territorial integrity does not appear to be under threat insofar as Boko Haram is a domestic actor. Clearly one thinks about what is happening with the Islamic State in Syria and Iraq and Boko Haram's aspirations. I think there is a very significant threat to the Nigerian state and its stability at present. Whether Nigeria's borders are going to be redrawn by this group is a bit less clear. I don't think there is much evidence that this is the case right now.

Henry Wilkinson is the head of analysis and intelligence at Risk Advisory, a global risk management consultancy

Hundreds of Nigerian soldiers have reportedly fled across the border to Cameroon over fears of attacks from the Islamist sect Boko Haram. It comes after the group declared a caliphate in a northern Nigerian town. (26.08.2014)

Amnesty International says it has video evidence of "extensive human rights violations" by Nigerian soldiers. The footage shows suspected Boko Haram militants having their throats slit and bodies thrown in an open grave. (05.08.2014)