Medics say 15 people have been killed in a crush at an election rally for Nigerian President Muhammadu Buhari inside a Port Harcourt stadium. A locked exit barred people's way, witnesses said. Nigeria votes on Saturday. 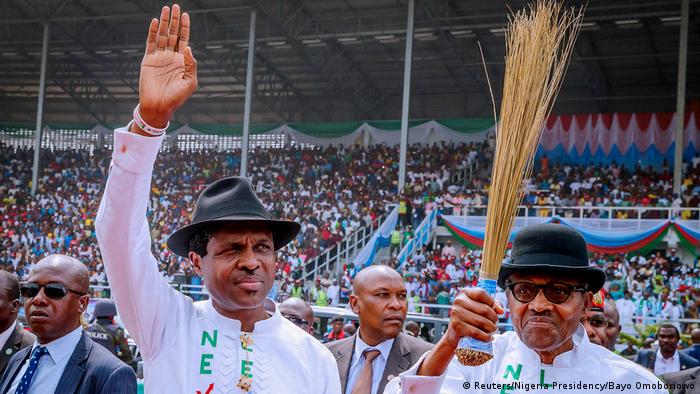 Port Harcourt's University Teaching Hospital on Wednesday said 15 people had been killed after a crowd crush at the end of an election rally featuring President Muhammadu Buhari on Tuesday.

Nine of the dead were woman, the rest men, said clinic spokesman Ken-Daniel Elebiga, adding that 12 others were also brought in with injuries.

Buhari's office said the president had been informed of the "tragic deaths of several members of his ruling All Progressive Congress party (APC) in a stampede."

Police in Rivers State, of which Port Harcourt is the capital, had earlier put the toll at four dead and four injured, adding that crowd control was being "improved."

Eyewitnesses quoted by the French news agency AFP and local media said panic broke out as the rally ended and people tried to force their way through a locked exit.

The victims taken away in ambulances had included a pregnant woman, said a stall holder who had been selling popcorn outside the gate of the city's Adokiye Amiesimaka Stadium.

Another witness quoted by AFP said police vehicles had prevented a "free flow of movement after the rally."

Last Thursday, two people were reported to have died during a crush at a Buhari rally in the northeastern state of Taraba.

Buhari is seeking a second term as president of Africa's most populous country against the challenge of businessman and former Vice President Atiku Abubakar.