Nigel Farage, the ex-leader of UKIP and a chief Brexit campaigner, has addressed a rally of Germany's far-right AfD party in Berlin. He received a standing ovation as a model of right-wing political accomplishment. 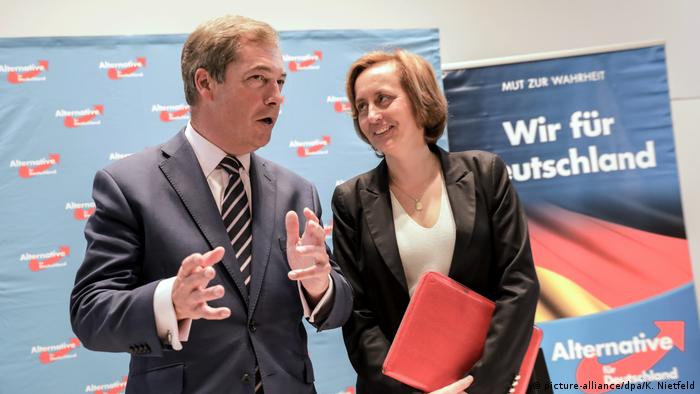 Farage received a standing ovation at the Alternative for Germany (AfD) election rally in Berlin on Friday. He was presented as a model of what a right-wing euroskeptic politician could achieve.

He had been invited by AfD deputy leader and European parliamentarian Beatrix von Storch - the granddaughter of Hitler's finance minister, Lutz von Krosigk, and a member of Farage's group in the European Parliament. "Nigel Farage showed the impossible is possible if you just believe in it and fight this fight - he did that for more than two decades and that makes him a role model for us," von Storch said.

"(I'm trying) to get a proper debate going in the biggest, richest and most important, powerful country in Europe about not just the shape of Brexit but perhaps even the shape of the European project to come," Farage told reporters. He said the German candidates for chancellor had failed to discuss Brexit as it was a "huge embarrassment for the European dream that both of them have had."

Farage said he believed Chancellor Angela Merkel would probably be better for Brexit as she was more likely to agree to a free trade deal between Britain and the EU. Martin Schulz, Farage said, as a previous president of the European Parliament, was a "pro-EU fanatic."

Farage spearheaded the Brexit campaign that saw the UK vote to leave the EU in June 2016. He was subsequently feted by the US president, Donald Trump, and other right-wing leaders in Europe, including France's Marie Le Pen.

He stepped down as leader of the UK Independence Party after the referendum, but has been linked to a possible return as the party appears to have lost its way in the absence of its guiding force.

The anti-immigration and anti-Islam AfD founded in 2013 could be the first far-right party in the Bundestag since the end of World War II. It is at around 11 percent and on course to become the third-largest party in German politics in the September 24 elections.

Many had seen a win for far-right Geert Wilders in the Netherlands as a harbinger of elections in France and Germany this year. Despite his clear loss, populist figures around Europe claimed a 'partial victory'. (16.03.2017)