Neymar unveiled as football's most expensive player, denies it's about the money

Paris Saint-Germain have unveiled the most expensive signing in football history. Brazilian star Neymar described the decision to leave Barcelona for PSG as the most difficult one of his life. 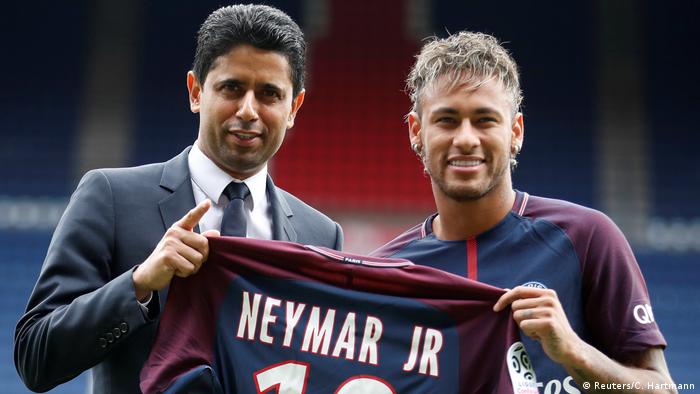 Neymar, who officially joined Paris Saint-Germain (PSG) for 222 million euros ($264 million) on Thursday, repeatedly told reporters at a Friday press conference that he decided to leave Barcelona for footballing reasons.

"I wanted a new challenge. I wanted something bigger. To do my best. And to do even better," he said. He added that he hoped to further develop as a player at his new club.

Although his wages are reportedly set to triple to 30 million euros a year after tax, the 25-year-old was also quick to insist that the move had nothing to do with the money.

'Not about the money'

"I was never motivated by money," Neymar said. "What I think about is happiness. If I was following the money I would maybe be in some other country."

The club's chairman, Nasser Al-Khelaifi, who described Neymar as "the best player in the world," also insisted that the striker could have made much more money at another club and that he had made the decision for "sporting reasons."

Al-Khelaifi also confirmed that a buyout clause was included in Neymar's contract, but he declined to put a figure on it. The 222 million euros that PSG spent on him was used to trigger his previous contract at Barcelona.

Asked about how PSG intended to ensure that it complies with UEFA's financial fair play rules, the chairman replied: "What we have done is completely transparent and legal... Whatever the media says, we honestly don't care."

However, he did say it was a good bit of business for the club, despite the record fee, because Neymar's value would "at least double inside two years."

Leaving Barca 'the most difficult decision'

For his part, Neymar also took great pains to insist that he had left Barcelona, where he won the Champions League in 2015 and collected two Spanish league titles and three Copas del Rey in four seasons, on good terms.

He described the decision to move on as "the most difficult decision" that he had ever made, and he praised Barca as a special club with wonderful teammates, who will remain his friends. He also admitted that some of his former teammates had tried hard to convince him to stay.

At the same time though, he stressed that he was keen to get down to work on his new challenge in the French capital.

"I can play tomorrow (against Amiens). Why not? I'll speak to the staff, but I really want to play. I haven't discussed where I will play. I will play where the coach wants me to," he replied when asked how soon the PSG fans could expect to see him in the squad. "I only stopped training in the last two days and I'm hungry to play football."

If the queue outside of the Parc des Princes is any indication, the supporters can't wait to see him in the number 10 jersey that was already on sale when the club's fan shop opened for business this Friday.