Thousands of people have been forced to leave their homes around the New Zealand city of Christchurch as a wildfire ravages wood and scrubland. A huge cloud has formed, with officials declaring a state of emergency. 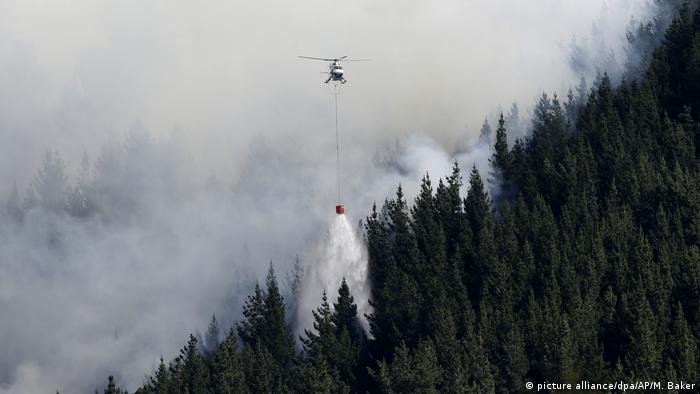 The fire is believed to have burned more than 700 hectares of scrub and vegetation, destroying several buildings since it began on Monday.

The blaze was no longer only a "significant rural fire on the boundary of the city," but a "city issue," with suburbs being evacuated, said Christchurch Mayor Lianne Dalziel, in a statement on Wednesday.

"Christchurch needs a multi-agency response given the seriousness of the situation," said Dalziel. "We need to be able to draw on all the resources possible to give our residents confidence in the ongoing response."

The fire is now visible from space, with a giant fire cloud - known as a pyrocumulus - having formed.

One dramatic picture was taken from a flight heading from the city of Dunedin to Auckland.

On Tuesday, one of 15 helicopters being deployed to fight the fire crashed, killing the pilot.

Officials in Christchurch and the neighboring Selwyn District declared a state of emergency.

Defense Minister Gerry Brownlee said Wednesday in a statement that the military had been called in to help fight the fire. The army would provide additional manpower as well as engineering equipment, water tankers and fire breaks.

The city was devastated five years ago when some 185 people were killed in the Christchurch earthquake.