Refresh the page for live updates. All updates in Coordinated Universal Time (UTC)

10:00 The US state of Hawaii is one of the last places in the world to ring in the New Year. An estimated 100,000 people are watching a fireworks display on Honolulu's Waikiki beach.

09:00 Alaska has just celebrated the start of the New Year. In the city of Anchorage, the celebrations were somewhat of a muted affair as all types of fireworks are banned, except for official displays. The city's public firework event ran in the early evening, not at midnight. Hours before the celebrations were due to get underway, a magnitude 5.0 earthquake struck, but no damage or injuries were reported.

08:00 The year 2019 has arrived on the west coast of the US and Canada. Around 50,000 people rang in the New Year in Los Angeles' Grand Park where the countdown and other colorful images were projected onto the 22-story City Hall.

Canada's biggest west coast city, Vancouver, put on a free outdoor party from early evening and was expecting a crowd of 100,000 outside Jack Poole Plaza for the midnight fireworks display.

Over the previous two hours, events were held in cities on US, Canadian and Mexican Central and Mountain time to mark the start of 2019. 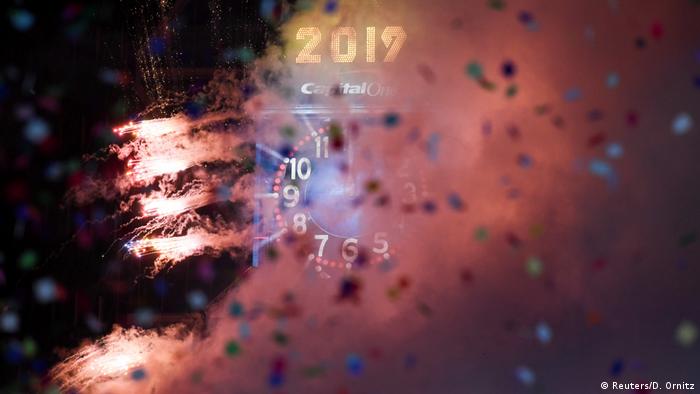 05:00 New York City welcomed in the New Year, along with the entire eastern seaboard of the US, including cities such as Boston, Atlanta, Washington DC, and Miami. Canada's eastern cities of Montreal, Toronto and Ottawa, also welcomed 2019.

Despite cold and rainy conditions, revelers flocked to Times Square to attend the traditional ball drop. Organizers of the event chose to pay special tribute this year to press freedom, inviting journalists from US broadcasters ABC News and NBC News, the Washington Post, Reuters news agency and other outlets, to join New York City Mayor Bill de Blasio in the ceremonial ball drop. 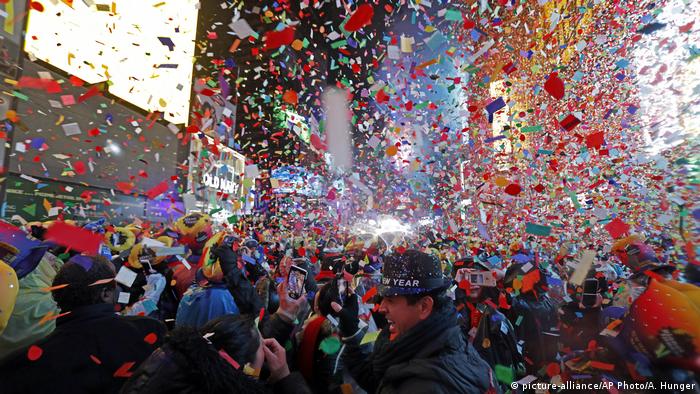 04:00 The countries of the Southern cone of South America, including Argentina, Chile and Uruguay, and most of Greenland welcome 2019. Many in Chile's capital Santiago will likely be sporting yellow underwear, a tradition that is supposed to bring good luck. While in the old town of Montevideo, Uruguay, revelers spent the last day of the year engaging in water fights on the street. Armed with water guns, buckets, balloons and even plain jars, citizens are expected to get wet, with many carrying around umbrellas to avoid getting splashed.

03:00 The New Year arrives in Brazil! Rio de Janeiro, Brasilia and Sao Paolo are the first cities to welcome 2019 and Brazil's southeastern coast is the first place in the Americas to celebrate the New Year. A fireworks show illuminated Rio's iconic Copacabana beach and some two million people were expected to gather there for the big celebration. 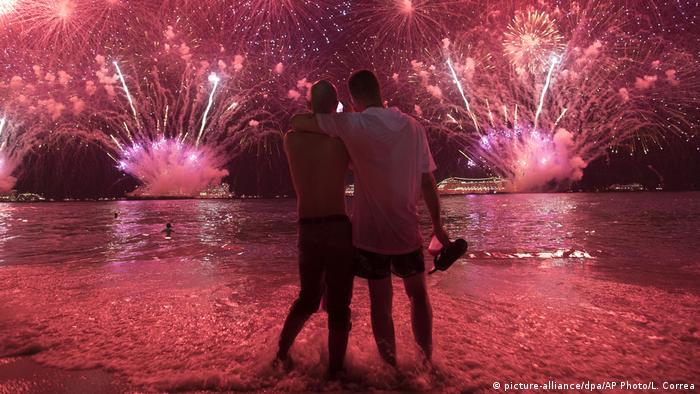 02:30 Many world leaders, including German Chancellor Angela Merkel, French President Emmanuel Macron, and Russian President Vladimir Putin, have given their takes on the previous year and their expectations for the coming one:

00:00 London, Edinburgh and Lisbon have joined the rest of Europe into the New Year! London Mayor Sadiq Khan dedicated the city's impressive display to its EU residents. "By paying tribute to our close relationship with Europe as we welcome in the New Year tonight, we will once again show the world that London will always be open," he said.

23:00 Your DW team in Germany is now celebrating too! Berlin, Paris, Vienna, Madrid, Rome and dozens of other European capitals have officially entered 2019. Although local traditions differ across the continent, Europeans usually celebrate with kisses, clinking wine glasses, and extremely loud firecrackers. The last part is especially true in Germany, where people are only allowed to buy firecrackers for the last three days of the year. 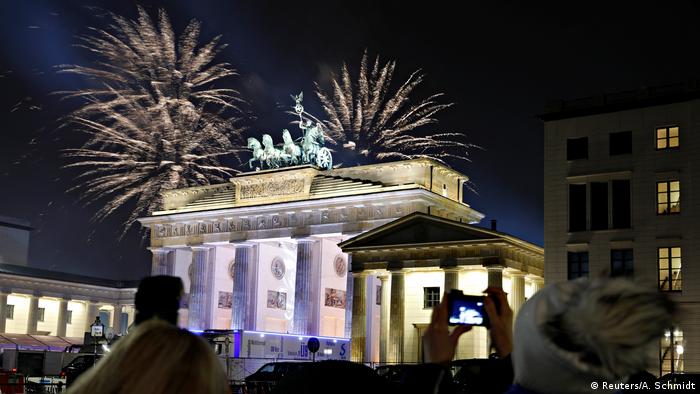 22:00 And it is New Year is South Africa! If you happen to read this from Johannesburg, be wary of the festivities in the suburb of Hillbrow, where residents traditionally chuck unwanted furniture out of the window.

21:00 The easternmost parts of Russia entered the New Year nine hours ago, but Moscow is only welcoming it now. Still, for some Russians, it is not really New Year until the president addresses the nation from outside the Kremlin. In the speech broadcast just before midnight, Vladimir Putin urged his compatriots to show unity and "generosity of the soul," saying that this generosity is "required both during holidays and workdays, when we support those who need help, who are lonely or sick."

As per tradition, Russian state television broadcasts 12 chimes of the Kremlin clock as Moscow welcomes in the New Year. This is traditionally followed by the national anthem.

20:00 The United Arab Emirates are entering 2019: Residents and visitors in Dubai have seen a laser, lights, and fireworks spectacle launched from the world's tallest skyscraper, Burj Khalifa. Officials have said some two million people were expected to descend on the city center for the show, according to the local daily The National.

18:30 The New Year has now arrived in India. Although Hindu worshipers have their own calendar, where the year begins on a different date every year, the arrival of 1 January is also a major event. Indians usually sing, dance and attend parties for the New Year celebration, similar to the people in other parts of the globe. 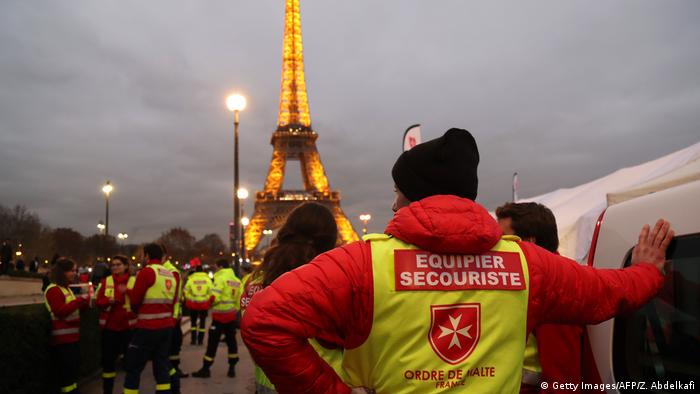 17:47 Paris is gearing up for the gigantic New Year's Party at Champs-Elysees where hundreds of thousands of people are expected to appear. The celebration will be guarded by 12,000 police officers, who will be searching bags and confiscating alcohol before allowing revelers into the main party area.

The anti-government "yellow vest" movement has called for "non-violent and festive" protests on the New Year's Eve.

17:00 Thailand is now celebrating the arrival of 2019. In the Buddhist-majority country, many locals travel to the Takien Temple outside Bangkok to mark the New Year with a symbolic resurrection ritual. Worshippers climb inside coffins while monks cover them with pink sheets and perform funeral rites. The symbolic rising from the dead is meant to get rid of bad luck and give the visitors a fresh start in 2019. 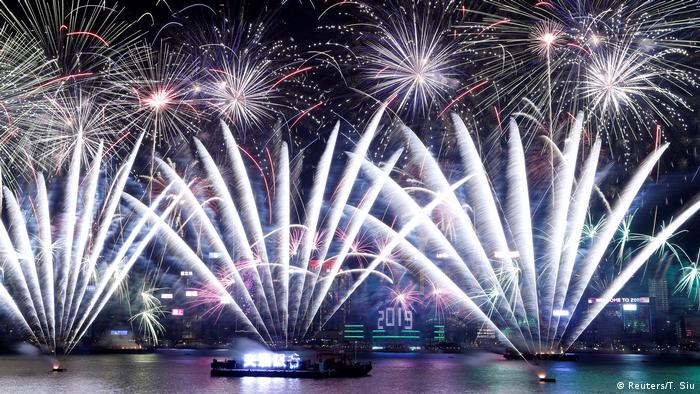 16:00 Although the Lunar New Year is still king in China, revelers gathered in Hong Kong for a massive fireworks display marking the arrival of 2019. In Beijing, celebrities attended a VIP gala dedicated to the 2022 Winter Games. President Xi Jingping addressed the nation before the evening news, saying that his government "sent out China's voice" into the world.

The celebrations in China came an hour after Japan welcomed the 2019 with a bout between American boxer Floyd Mayweather and Japanese kickboxer Tenshin Nasukawa. The 41-year-old American defeated the local champion in less than three minutes. 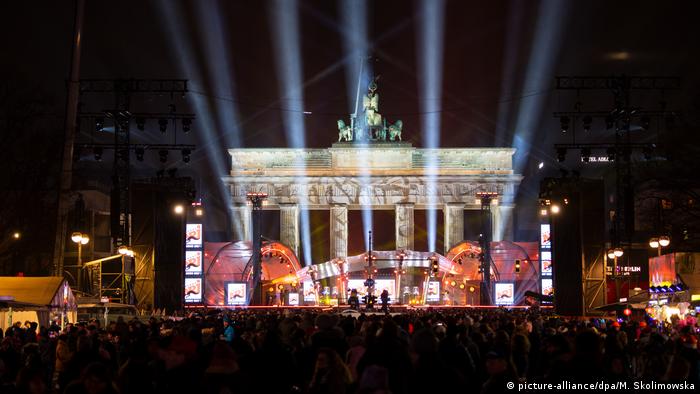 The party has already started in Berlin

15:47 Berlin opened its party mile which starts at the city's iconic Brandenburg Gate and stretches some two kilometers (1.24 miles) west to the Victory Column. The party is set to start in a few short hours, with city officials promising "live bands, DJs and a spectacular fireworks display at midnight." British pop singer Bonnie Tyler is also set to perform.

14:00 Brisbane celebrated New Year's an hour later than Sydney — even though Brisbane is located 2 degrees longitude east of Sydney. 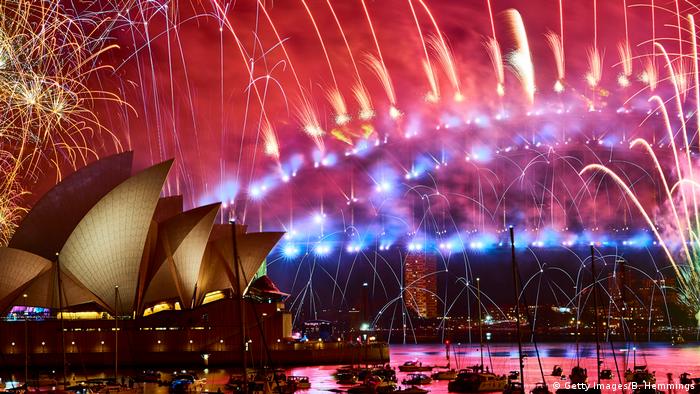 13:00 Tens of thousands have gathered in Sydney despite stormy conditions to witness the city's spectacular fireworks show for New Year's.

Organizers say it will be the most expensive celebration ever at 6 million Australian dollars ($4.2 million, €3.7 million). The 12-minute show was to feature 100,000 pyrotechnics and culminate at midnight with "(You Make Me Feel Like) A Natural Woman," a song made famous by the recently deceased Aretha Franklin.

12:00 Most of the remaining island Oceanic nations have now bid farewell to 2018.

11:00 Fiji, Tuvalu, and New Zealand have now joined in on the festivities. Fireworks were shot from the top of the Sky tower in downtown Auckland, New Zealand to ring in the new year.

Anadyr, the easternmost town in Russia, has also entered 2019.

10:00 Samoa has become the first full country to enter the new year. Fireworks exploded over the Samoan capital of Apia for locals and tourists who timed their visit to enter 2019 before anyone else.

The Pacific nation shifted to the zone west of the international date line eight years ago, jumping forward 24 hours and wiping out December 30, 2011.

The island of Kiritimati, part of the group of islands that makes up Kiribati, and Tokelau, an island territory belonging to New Zealand, were also among the first islands to enter the new year.

The new year is shaping up to be a turbulent one. The euro, the Ukraine-Russia standoff and the Syria crisis are key unresolved foreign policy issues that the German government will have to deal with. (30.12.2018)

Trade conflicts have put a stamp on 2018. There was no lack of threats voiced and punitive tariffs implemented. Is there any hope that the New Year will bring some improvement? DW's Andreas Becker looks for answers. (26.12.2018)

As the New Year steadily creeps across the globe, countries everywhere are welcoming it with fireworks, candles, countdowns and heightened security. DW brings you highlights as the world says, "Goodbye 2018, hello 2019!" (31.12.2018)