Wim Wenders' latest film, "The Beautiful Days of Aranjuez," is a melancholy contemplation of love and life. Originally written for the stage, this is Wenders' fifth collaboration with playwright and friend Peter Handke.

German filmmaker Wim Wenders and Austrian playwright Peter Handke have known each other since 1966. At that time, Wenders went to watch Handke's legendary play "Offending the Audience" at the Theater Oberhausen.

Three years later, they started working together. Wenders' short film "3 American LPs" was based on a work by Handke. Two years after that, the filmmaker adapted the novel "The Goalie's Anxiety at the Penalty Kick." The two later teamed up to write the screenplays for the films "The Wrong Move" (1975) and "Wings of Desire" (1987).

"The Beautiful Days of Aranjuez" is now the fifth collaboration between Wim Wenders and Peter Handke.

"Peter Handke calls this text a summer dialogue," Wenders said of his friend and long-time colleague. "It's about two people, a woman and a man, who are not a couple (anymore?), but who've known each other for a long time. They're sitting at a table in a garden or a park. They are surrounded by trees that are rustled by the wind now and then. Below them is an expanse of fields and Paris can be seen in the distance. It's summer…." 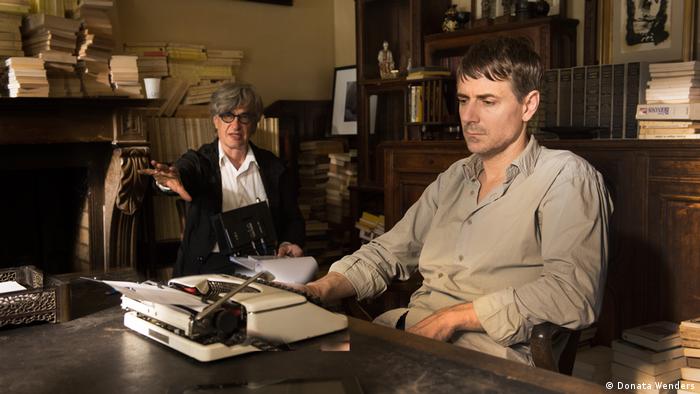 From these lines, it's clear to see what binds the writer and the filmmaker. It's their precise and nearly dissecting view of people and landscapes, of the elements and of elementary aspects of life.

Wenders and Handke are keen observers of life. That may sound mundane, but it sums up their approach: They are not interested in superficialities, but in the inner being found within both people and nature. This becomes all the more clear in "The Beautiful Days of Aranjuez."

Searching for the meaning of life

The dialogue between the two actors in the film is about nothing less than life itself. What is meaningful? What is important? What is the essence of love and of relationships between men and women? And what binds and separates the sexes?

Equally important are the objects that appear in the film - the garden table, the apple that's resting on it, the glasses and canister of juice, the 19th-century villa, the music box. The latter serves the function of forming a particular connection between Wenders and Handke. Numerous scenes in past Wenders films have shown protagonists holding a similar old-fashioned music box, and Handke wrote a text called "Essay about the Jukebox" in 1990.

Both Wenders and Handke also love emotionalism; they enjoy imbuing images and texts with significance and evoking moods and atmospheres. Both tend to wallow in memories and play with time. Things can get kitschy at times, and it may not be everyone's cup of tea.

In "The Beautiful Days of Aranjuez," the audience can expect both gorgeous scenery that, despite the theatrical setting, have a cinematic effect, and unnerving dialogues that go in endless circles.

Wim Wenders turns 70 at the top of his game

It's not a bad time for Wim Wenders to celebrate a milestone birthday: 70. The German filmmaker is flying high with a cache of international commendations and a return to form as a feature filmmaker. (13.08.2015)