The credibility crisis facing the UN's climate panel over errors in its 2007 report has cast a shadow on IPCC chair Rajendra Pachauri. Now, top researchers in Germany are among those calling for his resignation. 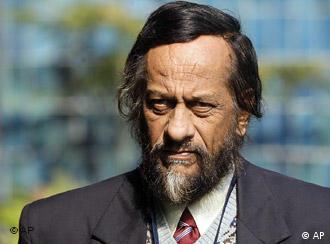 Despite flawed reports and ongoing criticism, Rajendra Pachauri has said he will not step down from his post as head of the United Nations Intergovernmental Panel on Climate Change (IPCC). UN leaders have also dismissed calls for his resignation.

Yet some members of the scientific community in Germany and abroad have taken a different view. His departure is seen as a potential path toward helping the panel recover from an embarrassing series of faulty assessments, released within the IPCC's fourth and most recent assessment report.

The IPCC recently admitted it had erred in forecasting that Himalayan glaciers would disappear by 2035, a claim it has since retracted. The mistake was originally published as part of the panel's report from 2007, which serves as the scientific authority for climate change issues.

An article published by Britain's Sunday Times on January 24 also questioned part of the 2007 assessment that drew a causal relationship between climate change and more frequent natural disasters. The paper quoted IPCC vice-chair Jean-Pascal van Ypersele as saying the panel was "reassessing the evidence." 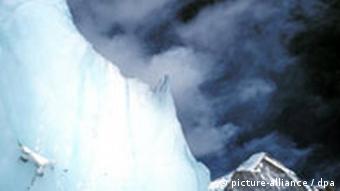 Another report in the Sunday Times last week cast doubt on the UN climate panel's claim that yields from rain-fed agriculture in some African countries could decrease up to 50 percent by 2020.

The current content debate surrounding the IPCC's 2007 report is the newest phase in the "ClimateGate" saga, which began when emails between panel members were leaked late last year. Critics characterized the exchanges as proof that experts had exaggerated climate change.

Errors in the panel's report aren't the only concern. The current controversy also involves questions as to the neutrality of the IPCC's top official, though Pachauri has repeatedly denied allegations of a scandal.

He has also rejected claims that his leadership of The Energy and Resources Institute (TERI), has interfered with his work on the IPCC – or that his organization stood to profit from the false forecast regarding Himalayan glaciers.

"TERI is not involved in this mistake," Pachauri said. But Britain's Telegraph newspaper claimed that TERI still has close ties to its original founder, the Tata Group – links that help benefit the company's carbon-trading business.

In an interview with the Times of India, Pachauri dismissed those claims, saying he had never profited "a single penny from my association with companies and institutes … All my dealings are totally above board." 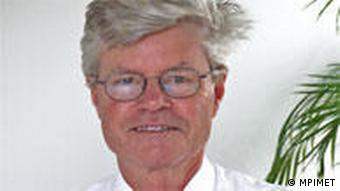 To Hartmut Grassl, any conflicts of interest, real or perceived, could still undermine the credibility of the panel. The former director of the Max Planck Institute for Meteorology in Hamburg told Deutsche Welle that this "mixing of duties makes [Pachauri] vulnerable."

Grassl is one voice calling for the climate panel chief's resignation: "An IPCC chair should be totally independent and neutral," he said, noting that new leadership would help head off outside efforts to undermine the real work of the IPCC.

Graßl stressed that the errors in the 2007 report were "minor" in nature, tied to one particular segment of the IPCC's reports, and in no way cast doubt on the fundamental evidence of climate change.

Another German researcher, GKSS research director Hans von Storch, told German newspaper Frankfurter Rundschau on Tuesday that Pachauri's apparent approval of "sloppiness" in the IPCC's report made him a burden to the climate panel.

Grassl hinted toward an internal debate within the climate panel's ranks and told Deutsche Welle he had already been contacted by new IPCC group leaders regarding potential candidates to take on the chairmanship.

"I was recently asked after this debate popped up concerning the real independence of IPCC, and how such obvious moral errors can happen," he told Deutsche Welle, referring to correspondence from 2009 that involved verifying the independence of possible replacements and their standing within the scientific community.

Yet Grassl said pressure from the panel itself would do little to influence the current debate.

Vote of confidence from key allies 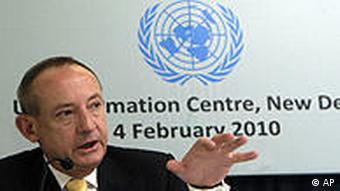 The United Nations has issued no call for Pachauri's resignation, with top UN environmental officials voicing their support for the IPCC chair in recent days.

"He has led the scientific community in a very dedicated manner," de Boer said. "The question really is how fast the glaciers are melting."

In an article for non-profit Project Syndicate posted on the website of the UN Environmental Program, UNEP head Achim Steiner wrote that "the unremitting questioning of the IPCC and its chair assumes almost witch-hunting proportions in some quarters."

Steiner, who leads the UN body responsible for sponsoring the IPCC, dismissed the faulty Himalayan glacier projection as a "typographical error."

Despite the spotlight on Pachauri, some members of the scientific community are more concerned with efforts to improve the IPCC itself.

Instead of calling for the panel chair's resignation, an article by five leading researchers in science journal "Nature" suggested that the IPCC be made more independent from government and political influences.

Eduardo Zorita, a scientist at the GKSS Research Center near Hamburg, supports a similar idea, which would see the IPCC transformed into an international agency.

Yet as much as the IPCC requires reform, the panel also needs a new chair, Zorita said. He criticized Pachauri's management of the controversy and said more should have been done to incorporate other opinions once errors in the 2007 report were spotted.

"The longer he stays, the more damaging for the IPCC it will be," he said.

In the meantime, the IPCC must focus efforts on regulating the production of its reports more effectively. Stefan Rahmstorf, professor of ocean physics at Potsdam University and one of the authors of part of the 2007 IPCC report, knows compiling results from thousands of studies isn't an easy task.

"I hope that there will be a review that looks at how IPCC can further improve its procedures, to weed out such mistakes next time around," he told Deutsche Welle. 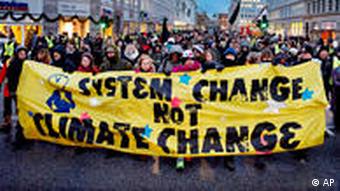 Despite the errors contained in the report, Rahmstorf emphasized the importance of understanding the overall content of the 2007 assessment before calling the credibility of the entire organization into question.

Due to a problem with the structure of the report, the first two sections were released together without allowing contributors to cross-check information. Rahmstorf said the authors of the publication's second section, which contained the error on glacial melt through 2035, should have cited data from the first section.

"It's important to understand these distinctions," Rahmstorf said. "There was an error in part two, but it's not the place where actual predictions are made," he said.

Grassl praised the first and third sections of the report, saying the Himalayan glaciers mistake was "peanuts" compared to the validity of "99.99 percent" of the assessment's contents.

"Can you imagine an 800-page document without some errors?" he asked. "This is impossible – we are human."

UN climate chief Yvo de Boer recently told reporters that the panel's "very unfortunate mistake" regarding Himalayan glaciers did not compromise the validity of the broader scientific evidence compiled by the IPCC.

But some researchers fear that recent errors could undermine efforts to combat climate change, including ongoing international negotiations to draft binding environmental legislation.

"The claim that the science is not credible - that claim could be used as a reason not to push for a strong agreement," Zorita said.

Post Copenhagen: Should citizens be called on to curb climate change?

Consumers' choices can help slow down climate change, yet people in rich and poor countries are interconnected, and implementing ecological measures like higher prices for imports need to be carefully assessed. (25.01.2010)

As the UN climate conference in Copenhagen enters its second week, environment ministers are set to hold a series of closed-door meetings in a bid to iron out a draft agreement to combat global warming. (14.12.2009)