Natural disasters have become extremely commonplace all over the world. It is not clear if climate change has a role in this but we may have to adapt to catastrophes striking more often, say experts. 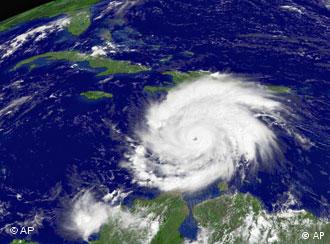 Are hurricanes really getting more frequent?

Every year 250 million people are affected by natural disasters. Since 1992 the international community has spent some $2.7 billion (1.9 billion euros) to help mitigate the impact of hurricanes, floods and droughts.

The organization Global Risk Forum in Davos, Switzerland, has specialized in identifying risks of any kind to society. Its president Walter Amman is convinced that climate change will lead to more disasters due to extreme weather.

Amman told Deutsche Welle that he believes that we no longer can or should argue that we merely register events more quickly and accurately than 20 years ago.

"If you look at the number of those events over the last 10 years, then it is clear that they have increased in number," he added. 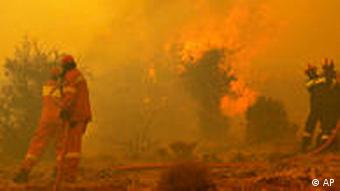 The German Committee on Disaster Prevention (DKKV) also sees climate change as a reason for the ever larger number and greater impact of natural disasters. The organization has demanded greater coordination between disaster prevention and climate change adaptation.

Gerd Tetzlaff, professor of meteorology at Leipzig University and head of the advisory board of DKKV, has emphasized that not all countries are affected equally by climate change induced natural catastrophes.

"Climate change has to be looked at locally, especially when it comes to those rare and particularly destructive events", said Tetzlaff. "The impact of climate change differs between regions."

In many European countries rising temperatures already lead to a greater incidence of heat waves which in turn increase the risk of wildfires. Climate change is not the sole reason for catastrophes such as these, but is helps create the conditions for them.

In some parts of the globe extreme weather events do play out more destructively than ever before, said Tezlaff.

"Looking back we can see that in the Caribbean the number of particularly large hurricanes has increased. And climate predictions imply that this trend will continue." 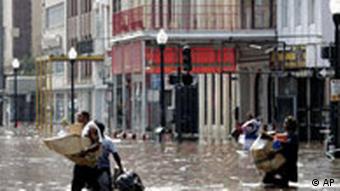 But experts still differ on the interpretation of the record. Professor Mojib Latif of the marine sciences institute GEOMAR in Kiel agreed that 2005 - the year that saw hurricane Katrina - set a record.

Latif told Deutsche Welle that what was special about that year was the total number and that we have never had more storms than in 2005. But there have been large fluctuations in hurricane activity across decades.

"If you look back to the 1950s we had another very active period. So I think it is premature at this point to say that there is a discernable influence of global warming - which is definitely happening - on hurricane statistics," he added.

However, the potential for this connection is certainly there from a scientific point of view, insisted Latif, who pointed to the Southern Atlantic Ocean as an example. Due to colder waters coming to the surface, it has, so far, been the only tropical ocean which produces no significant hurricanes.

"But if global warming proceeds, and if in addition the ocean circulation changes in way that the Southern tropical Atlantic gets much warmer, then this will become a region which will favor hurricanes", explained Latif.

There may be disagreement over the present impact of climate change on particular types of disaster but the prospect that things may change for the worse in the future are reason enough to turn attention towards preparing and adapting.

The flooding of New Orleans in the wake of hurricane Katrina in 2005 showed that rich countries can also be hit badly by extreme weather events. But these countries are in a better position to take preventive action or deal with the impact of climate induced disasters.

In poor countries the situation is different, because they can only do little to prepare and defend against the impacts of extreme weather. According to Dr. Walter Amman of the Global Risk Forum, there is an additional stress to many poorer nations that are also situated in regions particularly affected by the more direct results of climate change such as rising sea-levels.

"The impact of climate change will become more devastating in sub-Saharan Africa, in Bangladesh, many islands and archipelagos", he said.

Learning from the 1000 Year Flood

In 2002 parts of Germany's East were hit by heavy flooding. Many lost their homes, the cost of the destruction reached billions. But just what is the true cost of natural disasters? Researchers in Leipzig find out. (25.08.2009)

Experts from 140 nations meet in Germany from Monday to see how far the world has come with early warning systems in the 15 months since the devastating Asian tsunami. (27.03.2006)

As a UN conference on natural-disaster preventions got underway in Japan, a plan to create a global tsunami warning system was high on the agenda. (18.01.2005)