New technique allows US scientists to witness the birth of a ′baby planet′ | Science | In-depth reporting on science and technology | DW | 19.11.2015

When new planets absorb nearby gases and dust they get hot. A strange light is emitted as a result and that has allowed researchers to watch a distant exoplanet as it is being formed. 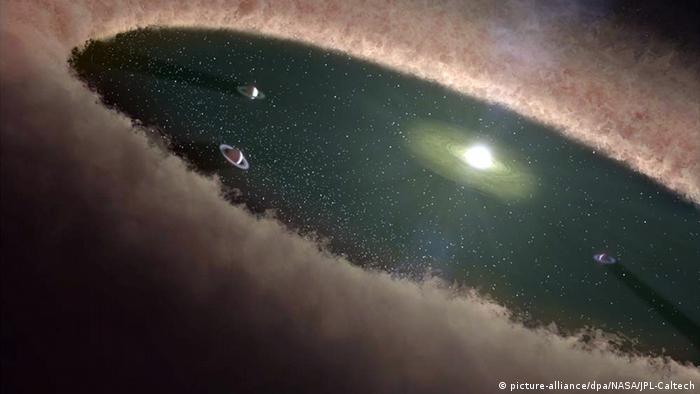 Using a novel technique, scientists have observed a "baby planet" being formed nearly 450 light years away.

Researchers used telescopes in Chile and California to observe a deep red light that hydrogen atoms emit when they're pulled across a planet's magnetosphere when it absorbs nearby gases and dust.

In the case of protoplanet LkCa 15 b, hydrogen atoms were heated up to nearly 10,000 degrees Celsius (18,000 Fahrenheit). The high temperatures caused them to transmit energy in the form of H-alpha (Hα) photons, which can be seen by telescopes on Earth.

A team of scientists under Stephanie Sallum in Tucson, Arizona used adaptive optics observations to record these photons and thereby detect the formation of the protoplanet, which orbits a relatively young star just two million years old. Our sun is 4.6 billion years old.

The star and its planets are located in the Taurus constellation inside a cloud of molecules.

Protoplanet LkCa 15 b had been detected before and identified as a planet that was still being formed.

But the novel method of detecting the planet's development through H-alpha light gives researchers a new tool to observe forming exoplanets elsewhere - for determining those planets' orbits and interaction with nearby disks of dust and gas - and it raises further questions about where, when and how planets can form around stars.

The results of the team's research are published in the "Nature" science journal on November 19.

Vote: astronomer Montmerle says exoplanet names are sure to be inspired by Star Wars

The International Astronomical Union is inviting hobby astronomers to vote on names for 20 new exoplanets. They also want suggestions. From literary characters to movie names - almost anything goes. (09.02.2015)