A new synagogue opened in the western German city of Krefeld on Sunday, 70 years after the Nazis destroyed the old one. 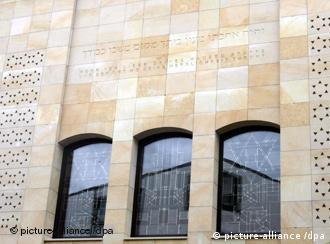 The original Krefeld synagogue was destroyed by the Nazis

Local politicians and leaders of Germany's Jewish community were among those present at the inauguration ceremony.

Among them were Charlotte Knobloch, president of the Central Council of Jews in Germany, and Juergen Ruettgers, premier of the state of North Rhine-Westphalia, where Krefeld is located.

Jews are back in the mainstream of German society and would never allow this right to be contested, she said.

The new synagogue can accommodate up to 300 worshippers. It is located in a converted commercial building that also houses a Jewish community centre, library and meeting rooms. 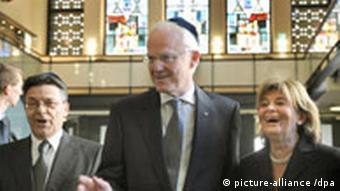 For Charlotte Knobloch, right, the new synagogue is a symbol of Jewish revival in Germany

Some 12 million euros ($17 million) were pumped into the renovation work, which was carried out under the auspices of the non-profit Isidor Herzfelder Foundation.

There are around 1,100 Jews living in and around Krefeld, an industrial city some 500 kilometers south-west of Berlin.

The only item that recalls the old synagogue is a three-piece ornamental window designed by Dutch artist Jan Thorn-Prikker for the original building in 1928.

The window was irreparably damaged when the synagogue was burned down during the Nazi pogrom of 1938, but was reconstructed from the original drawings kept at a local museum. 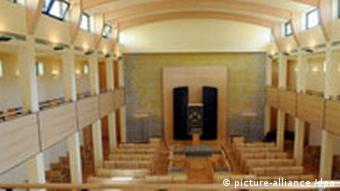 The Krefeld synagogue can accomodate up to 300 worshippers

The opening of the synagogue, the 20th in North Rhine-Westphalia, is another sign of the renaissance of Jewish culture in Germany.

In the nearby city of Essen the Old Synagogue is being given an extensive makeover so that it will be ready by 2010 when Essen becomes European Capital of Culture.

More restoration work is taking place on another synagogue destroyed during the Nazi pogrom in Darmstadt, not far from the banking centre of Frankfurt.

Today, there are more than 110,000 Jews or people of Jewish origin, giving Germany one of the largest Jewish populations of any country in Europe.

Holocaust survivor Frank Meisler was 10 when he fled the Nazis in 1939. After the war he became a successful architect and sculptor and is bringing his art, dedicated to war-time children, back to Germany. (24.08.2008)

The German government has agreed to pay 12.3 million euros ($19 million) to about 6,500 Jewish survivors of the Nazi occupation of Budapest, an international Jewish organization said Wednesday. (07.08.2008)