Holocaust survivor Frank Meisler was 10 when he fled the Nazis in 1939. After the war he became a successful architect and sculptor and is bringing his art, dedicated to war-time children, back to Germany. 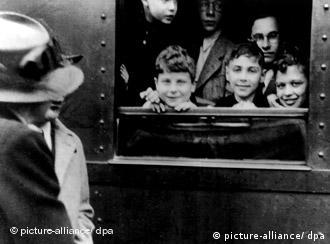 In August 1939, Meisler and a group of other children boarded a train at Berlin's Friedrichstrasse that was bound for England.

Meisler, whose parents were Jewish, had arrived in Berlin from the German port of Danzig (today Gdansk). He remembers his aunt Adele waiting for him on the station platform to give him a hug and hand him a few bananas -- a luxury in those years.

A few hours later the youngsters, most of them between five and 17, continued their journey to the Dutch coast to catch a ship bound for Harwich in England and then a train to London's Liverpool Street station. 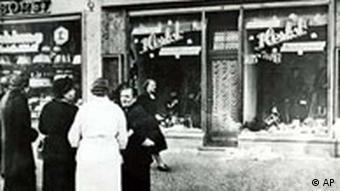 Kristallnacht in 1938 was a nicht of terror against Jews

In London, Meisler's grandmother and two aunts who had fled Germany in the mid-1930s were waiting to greet him at the station.

"I was lucky and was not alone," Meisler said recently in an interview with DPA news agency.

Many Jews sought refuge in vain

The so-called "Kindertransporte" (child transports) to England began in late 1938 after "Kristallnacht" in Germany left Jewish-run shops smashed and 267 synagogues ransacked and set ablaze in the notorious Nov. 9 night of Nazi terror.

Terrified by the sudden brutal turn of events, vast numbers of Jews desperately sought a country to move to, only to find that entry doors had been slammed on them in many cases.

Even the US made it difficult for Jews, granting entry visas only to those who could provide solid proof of income and wealth.

Britain was an exception, as far as Jewish children were concerned. Ultimately, some 10,000 youngsters would arrive in England via the "Kindertransporte" from Berlin.

Once in London, Meisler soon got used to the sounds of sirens and bombing raids when the war began. He learned English rapidly and would later become a successful architect, helping to design London's Heathrow Airport and other big projects.

With apartments in London and Tel Aviv, Meisler nowadays shuttles between the two countries. 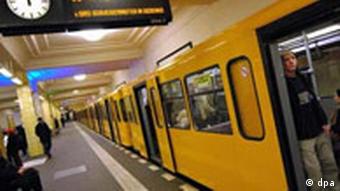 The Friedrichstrasse subway station is in the heart of Berlin

The architect turned sculptor has been a frequent visitor to Berlin of late, where he recently offered to donate a major art work to the city.

The bronze sculpture, six square meters in size, depicts children in sombre grey attire, with Star of David patches attached to their clothing. The girls have plaited hair and 1930s-style clothes; the boys are carrying a few possessions and wearing flat caps.

The group symbolizes the 1.5 million Jewish children for whom there would be no escape and who would later end up being murdered in the Nazi concentration camps along with their parents.

Separate from this group, two children peer serenely in another direction. A boy has a small suitcase, a girl a satchel on her back.

Both look calm and unafraid. They represent the 10,000 children able to depart a country that no longer wanted them.

A bronze sculpture of Meisler's is already on display at the Liverpool Street underground station in London. Inaugurated by Britain's Prince Charles in 2006 it shows five Jewish youngsters with suitcases on rail tracks against a station background.

In March this year, a second work of Meisler's devoted to the war-time rescue of Jewish children was installed -- this time at Vienna's Westbahnhof. It depicts a young boy, lost in his thoughts, sitting on a brown suitcase. 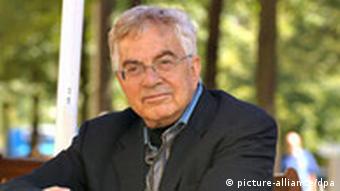 Meisler lives in England and Israel

In Berlin, the city's central Mitte district authorities were delighted to accept Meisler's more recent "remembrance" sculpture, even agreeing a hand-over date with him and the spot where it is to be installed at the Friedrichstrasse station.

But Berlin government cultural officials were less enamored and initially rejected it. They found the design somewhat bland, more in keeping with a school outing than a dramatic war-time evacuation.

Mitte district officials, however, have decided to ignore such official misgivings about the work. On Nov. 30 -- 70 years to the day when the first "Kindertransporte" to England began, it will be inaugurated.

Three days after Meisler left Germany for England, his parents were arrested by the Gestapo and later murdered at Auschwitz.

Although he has a lot to do with abstract art, Meisler insists that real life-size figures were needed for his latest work. People using the Friedrichstrasse station had to be able to identify with the sculpture, he said.

Berlin's memorial to gays and lesbians persecuted during the Nazi era has been vandalized less than three months after it was inaugurated, police in the German capital said Saturday, Aug. 16. (16.08.2008)

Almost nine months after a German television documentary highlighted the exploitation of Nazi prisoners that helped the Quandt family make its fortune, a family member spoke up about the issue. (01.08.2008)