New round of EU-US free trade talks begins amid protests | Business| Economy and finance news from a German perspective | DW | 22.02.2016

New round of EU-US free trade talks begins amid protests

US and EU negotiators have begun the twelfth round of talks in Brussels on the proposed Transatlantic Trade and Investment Partnership (TTIP). Greenpeace was on hand to protest against the controversial deal. 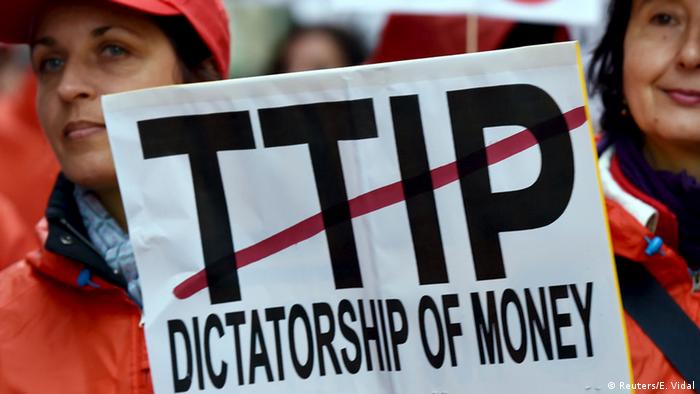 Activists from the environmental lobby group blocked entrances to the building in which TTIP negotiations were to be held on Monday morning, as European Union and US negotiators arrived for the new round of talks. This round is the first time that the topic of "investor protections" will be up for negotiations.

Among the main points of criticism against TTIP by Greenpeace and many other civil-society groups are TTIP's draft Investor-State Dispute Settlement (ISDS) mechanism. These would by-pass ordinary courts and would, critics say, allow corporations to sue governments for lost future profits if regulations are changed to their disadvantage. Such reversals have occurred through application of similar ISDS mechanisms in previous trade agreements, such as NAFTA, the North American Free Trade Agreement between the US, Canada and Mexico.

Even small and medium-sized businesses are coming out against TTIP, not just consumer or environmental groups. ISDS has been among its most controversial aspects. In response, the European Commission, after sustained mass protests and political controversy focused on ISDS threatened to derail TTIP altogether, decided in late 2015 to propose "Investment Courts" instead of the current version of ISDS, which had been criticised as intransparent processes in which private-sector trade lawyers were paid very high fees on temporary contracts to make decisions on corporate lawsuits against governments for which there was no means of appeal, bypassing ordinary courts - and democratic processes. 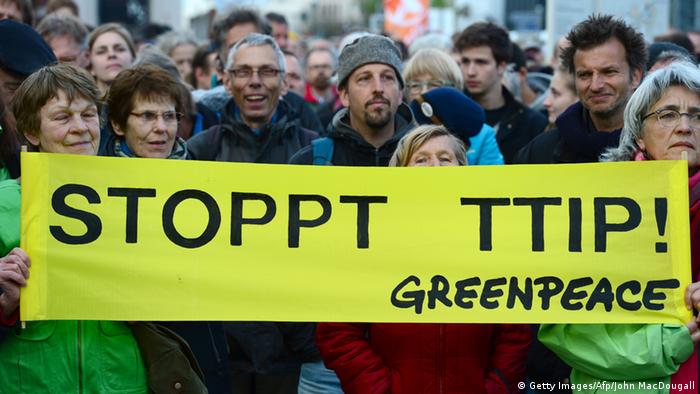 The EC's proposed new "Investment Courts," like ISDS, represent a way of bypassing ordinary courts. However, they foresee an appeals court as well as a court of the first instance, and the judges on these courts would be hired under long-term civil service contracts.

"We hope for a positive resonance and substantial decisions during the course of this year," said a speaker for the German federal ministry of economic affairs. The European Commission's proposal for an Investment Court was a consequence of an initiative by German Vice-Chancellor Sigmar Gabriel, who is the federal Minister of Economy and Energy.

But the Investment Court proposal hasn't satisfied some critics. "The proposed agreement would lead to an unacceptable parallel justice system for corporations," said Lena Blanken, a spokesperson for the consumer lobby group Foodwatch, pointing to a recent report by the German Bundestag's parliamentary research unit.

The research report confirmed that there was reason to doubt whether proposals for "investor courts" or ISDS mechanisms was compatible with European Union legal principles affirming the autonomy of European Union law and equal treatment under a single set of laws. A German judges' association has expressed similar concerns.

The research service's opinion was written in relation to the recently negotiated "Comprehensive Economic and Trade Agreement" (CETA) between Canada and the European Union, but the same arguments apply to TTIP, according to Blanken.

The German federal government supports the European Commission's goal of completing TTIP negotiations during 2016, and Chancellor Angela Merkel has repeatedly expressed a desire to wrap them up sooner rather than later - perhaps with an eye to preventing TTIP from becoming a major issue in federal elections coming in 2017, since many citizens are hostile to the deal and its secretive negotiation process.

The main opposition parties, including the Green Party and Left Party, are vehemently against TTIP, which is being negotiated in near-total secrecy and which they suspect will further entrench the privileges of multinational corporations and financiers over the rights of citizens and elected governments. Critics fear TTIP might not only result in weaker consumer and environmental protections in the short term, as US and EU standards are harmonised. The treaty would also make it very difficult to strengthen standards in future, since multinational corporations could sue governments for lost profits as a result of regulatory changes.

"This trade deal is not about trade. It's about the transfer of power from people to big business," Greenpeace campaigner Susan Jehoram Cohen said in a statement.

The investor-state dispute settlement mechanism isn't the only issue up for discussion in this round of talks, the twelfth in a series that began in July 2013. The two sides will this week also explore how to achieve regulatory compatibility in the automotive, pharmaceutical, textile and other sectors, an EU source said on condition of anonymity.

Thousands of people have demonstrated in the German capital, protesting against factory farming and genetic engineering of crops. A planned free-trade agreement between the EU and the US also roused protesters' ire. (17.01.2015)