The right-wing Alternative for Germany (AfD) has garnered some of its best numbers yet in a nationwide poll. Meanwhile, the CDU and SPD have lost support. 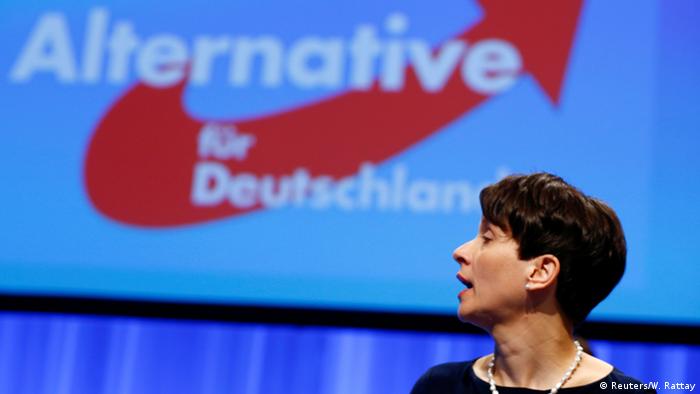 The AfD is pulling ahead of the Greens, the Left party and the Free Democratic Party (FDP), putting it on track to become the third-largest party in the country, according to a new poll released by German public broadcaster ARD.

The poll shows the AfD's support at 16 percent, its best showing yet. Angela Merkel's Christian Democratic Union (CDU) came in at 32 percent and the Social Democratic Party (SPD) at 22 percent.

Though both parties each lost one percentage point since the last ARD poll on September 1, the CDU and SPD still won enough support to maintain the ruling "grand coalition" if a federal election were held now.

The Left party came in at 8 percent, the Greens at 12 percent and the FDP at 6 percent.

The AfD, meanwhile, is well above the 5 percent it would need to win seats in the Bundestag.

The rising right-wing party was established in 2013 originally as an anti-euro party, but has since gained a large following for its anti-migrant stance. It now holds seats in 10 of the 16 state assemblies.

Ifratest dimap conducted the poll, which surveyed 934 people and has a margin of error of 1.4 percent to 3.1 percent.

A member of the right-wing party Alternative for Germany is being probed for allegedly selling Nazi items in his antique store. The candidate might have violated German law. (22.09.2016)

France's National Front and Germany's AfD have things in common, but things divide them, too. In both countries the right-wing parties are positioning themselves in preparation for important elections in 2017. (12.09.2016)