A new panel, consisting of the heads of state of five African countries, has set itself a one-month deadline to resolve the stand-off in Ivory Coast. But experts are skeptical about its commitment to democracy. 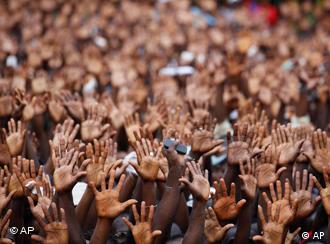 Ivory Coast had a free election, but its result has not been respected

A high-level panel named by the African Union faces an uphill battle to agree a unified stand on Ivory Coast's political crisis and has limited new options to offer the country's two rival leaders.

That's the pessimistic conclusion of many observers of the current situation in the West African state, which currently has two governments. One is internationally recognized - led by Alassane Ouattara, while the other, led by President Laurent Gbagbo, is supported by the country's powerful military.

The panel members are to travel to Ivory Coast at a yet undetermined date to submit binding proposals for the two rival leaders.

While the West African bloc ECOWAS favors the use of force to oust Gbagbo, South African President Jacob Zuma recently called for a review of the strategy that calls for one of the rivals to go. 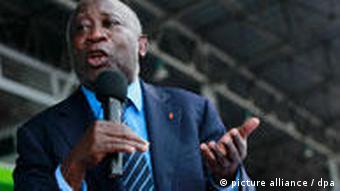 Gbagbo has the backing of the Ivorian military

Uganda's President Yoweri Museveni also pressed for an investigation into the disputed November 28 Ivorian presidential run-off, a strategy that United Nations Secretary-General Ban Ki-moon said would be a "grave injustice."

Ouattara was named the winner of the poll based on UN-certified results from the election commission. But the results were reversed by a pro-Gbagbo legal body, which cited fraud in the pro-Ouattara north of the country. Since then, Ouattara remains stuck in a hotel protected by UN troops.

No appetite for war

The chairman of the AU Commission, Jean Ping, said recently that the panel will aim to help Ouattara "exercise power" through a negotiated political deal, but Dirk Kohnert, researcher at the Hamburg-based German Institute of Global and Area Studies (GIGA), thinks the panel itself is already a compromise too far.

"In my opinion, this panel is the lowest common denominator method for finding a compromise," he told Deutsche Welle. "And really it goes against the original intention, because the loser of the election now has the power to question legitimate election results and force a so-called compromise, which is neither legitimate nor legal. It shows the contradictions in the African Union and the international community."

The contradictions were partly born of a sense that neighboring countries have got cold feet about a military option. Ghana in particular fears that an armed intervention to oust Gbagbo could result in either a civil or regional war.

"At first, it looked like the international community, the AU and the EU, were all towing the same line," said Kohnert. "But it looks like a few African countries are starting to fear for their own future and are backpedaling a bit. A lot of countries are now saying there's no way they will take part in a military operation."

Lucien Toulou, country director of the Electoral Institute for the Sustainability of Democracy in Africa (EISA), is suspicious of the panel.

"There is a question of the panel's commitment to democratic principals," he told Deutsche Welle. "Chad is not a free country, Burkina Faso is partly free, South Africa is free, Mauritania is not free, and Tanzania is partly free, so you wonder how people who are not democratically elected in their own country are going to make sure that the verdict of the Ivorian people is respected." 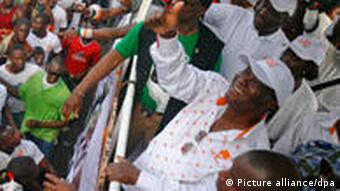 Ouattara is blocked in a hotel protected by UN troops

Toulou also thinks the panel's options are limited by its practicality.

"I'm not sure how far the panel will be able to succeed, because the readiness of Gbagbo to accept its conclusion is not something we can take for granted," he said. "I don't think Gbagbo is likely to accept any conclusion that calls on him to relinquish power, and I don't see what kind of mechanism the panel could put in place to make sure its decision is accepted."

This apparently leaves only one recourse - economic sanctions. But there are plenty of problems here too.

Kohnert also has plenty of reservations about sanctions. "We've seen that Gbagbo can use his military means to simply rob the BCEAO banks (Central Bank of West African States - ed.) - to get money to pay his army for a month at a time."

Ivory Coast is blessed with one of the strongest economies in the region, which has developed a comparatively wealthy middle class. But that middle class, where the opposition to Gbagbo is founded, is especially vulnerable to sanctions.

In the end, Kohnert is skeptical that the international community will be able to force Gbagbo out.

"Gbagbo is playing for time, and he's a very clever tactical player," he said. "It looks like he'll force his own way eventually. I expect it will come down to a power-sharing situation, whether that's good for the population or not."

An activist was killed Tuesday in Ivory Coast when security forces loyal to incumbent President Laurent Gbagbo raided the headquarters of an opposition party that supports Gbagbo's rival. (04.01.2011)

The UN says peacekeepers will press on with efforts to investigate alleged killings in Ivory Coast. Regional leaders still hope to persuade the country’s incumbent leader to step down in favor of a political rival. (03.01.2011)

With Africa on board, sanctions against Ivory Coast could work

Ivory Coast's Laurent Gbagbo insists that the sanctions imposed on his regime do not worry him in the slightest. Sanctions have rarely worked, but if West Africa stands united against Gbagbo, they may just work. (30.12.2010)