Anders Fogh Rasmussen has promised to respect all religions in his new role at the head of NATO. As Danish prime minister he was accused of tolerating religious slurs. 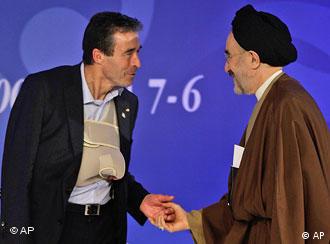 At the Alliance of Civilzations summit in Istanbul, a meeting that promotes dialogue between leaders of the West and the Islamic world, Anders Fogh Rasmussen has called for a balance between religious respect and freedom of speech.

His appointment as the new Secretary General of NATO has been met with scepticism in the Muslim world because of his track record as Danish prime minister. The Turkish government of Recep Tayyip Erdogan was one of the strongest critics of his appointment, and had threatened to veto it.

As prime minister, Rasmussen did not condemn cartoons depicting the Muslim Prophet Muhammad as a terrorist. The images appeared in a Danish newspaper in 2005, sparking widespread criticism and protests throughout the Muslim world.

Rasmussen, however, said at the time that for him to intervene or punish the paper would have infringed on freedom of speech and of the press.

Rasmussen did not apologize for the 2005 incident in Istanbul on Monday. He said that freedom of opinion was "of central importance" to democracy, but added that respect for religious sensiblities was equally important.

He described "intensifying dialogue and cooperation" with the Muslim world as one of his major tasks as NATO Secretary General. "I regard this as quite a special personal responsability," he said.