New HIV infections worldwide fall to a record low, the UN reports | World| Breaking news and perspectives from around the globe | DW | 21.11.2011

A significant expansion in access to treatment helped slash the number of AIDS-related deaths in 2010, bringing the number of people surviving with HIV to a record 34 million, the UN said in a new report. 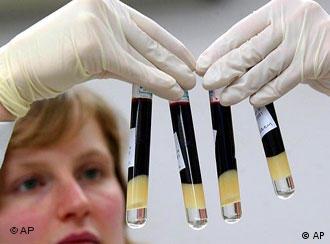 The tally of HIV carriers is on the rise, due to the drop in AIDS deaths. But the number of new HIV infections around the world, according to the latest report released by UNAIDS to mark World Aids Day on December 1, fell to a record low of 2.67 million last year, dropping 21 percent compared to the number in 1997.

In Germany, the Robert Koch Institute reported that there were about 2,700 new infections so far in 2011 (2009: 2,885). The RKI said some 73,000 people in Germany were infected with the human immunodeficiency virus, HIV.

Speaking to journalists in Berlin on Monday at the presentation of the report, Michel Sidibe, the executive director of UNAIDS, said the advances in treatment were a “game-changer.” 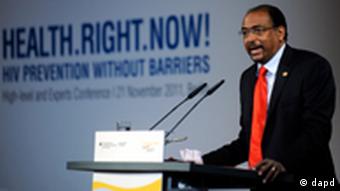 “We are on the verge of a significant breakthrough in the AIDS response. New HIV infections continue to fall and more people than ever are starting treatment. For the first time, we are able to demonstrate that if you put people on treatment early you can reduce the number of new infections,” he said.

The UN report says that about half of those eligible for treatment are now receiving it, with the most dramatic improvement in sub-Saharan Africa, where the number of people undergoing treatment has climbed 20 percent between 2009 and 2010.

As a result of better access to healthcare, the number of AIDS-related deaths is also falling, said UNAIDS, which spearheads the United Nations drive against the disease. In 2010, 1.8 million deaths were linked to AIDS, down from a peak of 2.2 million in 2006.

Not only is treatment helping to prevent new AIDS-related deaths, but it is also contributing to a drop in new HIV infections, the report shows. Patients getting drugs are less likely to infect others because prevention programs are coupled with their treatment, the report said.

The number of new infections among children was also down to 390,000 – well below the figure of 550,000 in 2001. UNAIDS noted that worldwide nearly half of all pregnant women carrying the virus had received medication to prevent mother-to-child transmission. 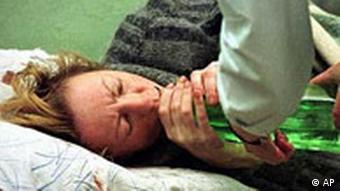 The UN agency said that the full preventative impact of HIV/AIDS treatment is likely to be seen in the next five years as more countries reach high levels of treatment coverage.

On the downside, however, despite several decades of research, no AIDS vaccine is in sight and the disease is still incurable.

In some countries, notably Russia, Ukraine and Central Asia, the number of HIV infections and AIDS-related deaths between 2001 and 2010 soared 250 percent. The cause in most of these instances was not sexual transmission but the use of contaminated drug utensils.

The UN agency pointed out that due to the current global economic problems, eradicating the disease was still a long way off. Governments in some of the hardest hit countries want to act, it said, but this means nothing, if there is no money to make it happen.

Dealing with Afghanistan's expansive poppy fields - and the ensuing opium trade - is central to the war against the Taliban and al Qaeda. While most of the drugs are exported, domestic use has now led to an HIV epidemic. (30.05.2011)

Rampant heroin addiction in Russia is threatening to undermine economic growth and accelerate population decline. Social taboos make it difficult for addicts to seek the clinical help they need to kick their habit. (18.04.2011)