Chancellor Angela Merkel has said it makes sense for her to travel to China once a year as part of German efforts to strengthen cooperation with the Asian country. The Chancellor is wrapping up her latest visit. 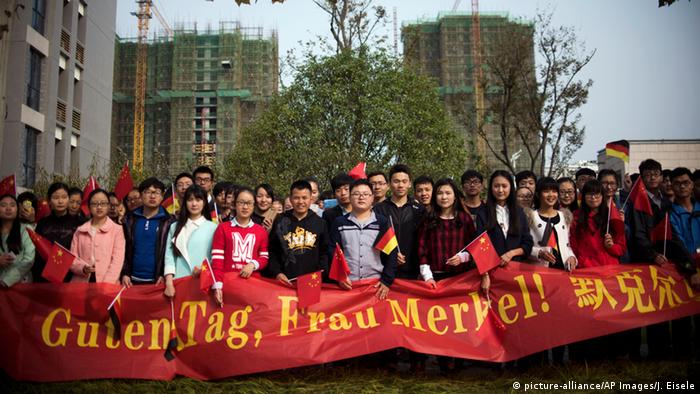 German Chancellor Angela Merkel on Friday accompanied Chinese Premier Li Keqiang to his home province of Anhui in China's east to preside over the signing of 15 business agreements.

Chinese companies signed a deal worth around 1 billion euros ($1.1 billion) for 100 helicopters from European aircraft manufacturer Airbus. As part of the agreement, an assembly plant for the light H135-type helicopter will be established in the Asian country. The deal comes one day after Airbus signed contracts with Chinese partners on the delivery of 100 A320 passenger planes and 30 A330 aircraft worth 15.4 billion euros.

German delegates told the German Press Agency that economic cooperation agreements sealed during Merkel's two-day visit amounted to a total of around 20 billion euros. Germany is China's leading economic partner in Europe, with bilateral trade between the two countries hitting a record high in 2014.

Speaking in the provincial capital Hefei, Merkel said the German government had plans to finalize an agreement with Beijing by 2016 to prohibit computer-based industrial espionage on both sides. China already has such agreements with the United States and the United Kingdom.

An invitation to Anhui province is considered a great honor for Merkel, given that it's the first time Premier Li has invited a foreign leader to visit his home. The chancellor visited the University of Hefei to celebrate 30 years of student exchanges with German universities, pledging to boost youth and educational exchanges between the two countries.

Prior to Angela Merkel's China trip, the big question was whether Germany's significance for China was diminishing. But it's now clear Beijing has done everything to counter this impression, says DW's Philipp Bilsky. (30.10.2015)