A monumental war history in German, which has just been completed after 30 years of work, explores a question that preoccupies modern Germans: why Nazi Germany fought on, defying all military logic, to the bitter end. 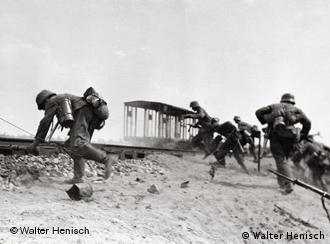 Many Germans blindly followed their Fuehrer

The government-funded military historians who researched the series are thoroughly anti-Nazi, but at the same time were curious about the strategy and mindset that drove their grandfathers' generation.

The findings can be set alongside existing histories of the US, British and Russian military efforts to complete the picture of what happened on the battlefield during the titanic 1939-1945 conflict.

Using secret German documents and probing behind the screen of propaganda, the historians concluded in the earlier volumes of the 10-part work that Adolf Hitler's forces genuinely believed at first they could seize and hold vast tracts of Eastern Europe.

It took more than two years of fighting to establish that Hitler's war aims were unachievable. Hitler probably realized that himself.

After the army had advanced 2,000 kilometers (1,200 miles) east of German soil, Nazi Germany's war of aggression morphed into failure during late 1941 and early 1942 when the Wehrmacht (the official German army, navy and air force) could not achieve any knock-out blow.

Yet it took nearly three more years to end the war. The Wehrmacht did not capitulate until after the Fuehrer had committed suicide in his Berlin bunker in April 1945.

Part 10 of the war history, which has just come out in two volumes, examines the collapse of the Third Reich in 1945. The entire history, "Das Deutsche Reich und der Zweite Weltkrieg" (The German Reich and the Second World War), was researched by the German military history unit MGFA, which is now based in Potsdam near Berlin. The project began in 1978.

The part on 1945 has chapters on naval warfare, the Allied air onslaught on Germany, the operations of the Red Army on German soil, German industry and the transition to post-war reconstruction, the fate of prisoners of war and ethnic "cleansing" as the war ended.

Part 8 several years ago foreshadowed the answer to the question of why the Nazis did not give up.

To the very end, the Nazi regime required Germans to recite their belief in "ultimate victory." But in the final years of the war, part 8 suggested, Hitler's mind gradually focused on staging a vain but heroic last stand.

Part 10 explores various explanations, including a "suicidal urge" in the dictator's personality.

Hitler's all-or-nothing approach has been described by his biographers as a key to his rise, and an exiled German writer, Sebastian Haffner, suggested as early as 1940 that the method was also the mark of a "potential self-killer."

With all dissent punished, the changing attitudes of the German public and the soldiers is more difficult to establish, particularly in the closing months of the war, when the documentary record of a Germany sinking into chaos and defeat is sparse.

The history emphasizes that German fanaticism was not monolithic and that German attitudes in any case were contradictory.

While other types of history explore the moral failure that led the Germans to ravage Europe and unleash the Holocaust, a military history takes a more technical look at what the military did, how it nursed its resources and what its political masters aimed for.

Rolf-Dieter Mueller, editor of part 10 and leader of its 11 authors, writes in an analytic summary that by 1943, after four exhausting years of war, a majority of Germans probably would have accepted a surrender if it had not been for Hitler's determination to fight on regardless.

The volume's account of the war on the western front in 1944 and 1945 describes the German military fighting on towards self-destruction under mottoes such as "for honor" and "for the fatherland," believing they were "doing their duty."

"That was their common denominator with a majority of the Germans, who had been simply sticking to what they were doing, or had not sought any alternative, or had not been able to visualize any other way," the book says.

The chapter on the army's last stand describes the fanatical refusal to surrender that made Germany's own military the greatest danger to Germany's own people, but it also refers to the many cases of officers and men who indirectly saved fellow Germans' lives.

On their own responsibility and often risking execution for treason, some of the German military openly disobeyed orders or subtly wasted time so that the Allied invasion of Germany could proceed quickly without even more loss of lives and property.

The epilogue to the work states, "Hitler waged his personal war for six years, supported by sentiment in Germany that remained broadly favorable even after a series of defeats and never turned to public resentment, despite growing apathy and war weariness.

"To the Germans, no alternative appeared feasible, other than the unconditional surrender demanded by the enemy," the book adds.

Most of the rest of the world was needed to defeat the most efficient fighting machine of its generation, which had battled on despite Hitler's strategic blunders.

Its commanders refused to sue for peace when it became the militarily rational thing to do, and remained loyal to the dictator because of their own collaboration with his criminal objectives.

Explaining modern Germany's reluctance to fight the Taliban and its focus on collective defense, the last part says the war taught post-war Germans an abiding lesson and they deliberately renounced any capacity to wage a war of their own ever again.

Germany's submission to NATO has meant that the Second World War was the "last war of the Germans" in history.