Landmark Trial Pushed Germany to Tackle Nazi Past | Germany | News and in-depth reporting from Berlin and beyond | DW | 20.05.2008

Fifty years ago, a trial against 10 members of a Nazi commando in the city of Ulm, changed the way West Germany dealt with its fascist past and crack down on crimes committed by the Nazis. From July 28 to August 29, 1958, 10 men from a special Nazi commando, "Tilsit," went on trial in the West German city of Ulm in the state of Baden-Wuerttemberg. The so-called Ulm Einsatzgruppen trial, one of the largest in a West German court that centered on the mass murder of Jews, accused the men, Gestapo and SS members, of killing more than 5,000 Jewish men, women and children in Lithuania.

The proceedings revealed gruesome crimes and showed that many of the perpetrators continued to live normal lives in West Germany for years after the war, their murderous campaign largely undetected. The trial is considered a major break with how Germany dealt with its Nazi past until then.

DW-WORLD.DE spoke to Dieter Pohl, a historian and lecturer at the Institute for Contemporary History in Munich, about the historic trial 50 years ago.

DW-WORLD.DE: The Ulm Einsatzgruppen trial is considered a turning point in how Germany dealt with its Nazi past. Why is that?

Dieter Pohl: The bulk of the Nazi war crime trials took place right after 1945. Basically, from 1945 to 1949, there were parallel Allied tribunals and German courts. The German courts largely dealt with crimes committed against German citizens; the Allied courts dealt with all others, which meant the majority of Nazi crimes. These proceedings petered out by the end of the 1940s and early 1950s largely because West German society suppressed the past and preferred not to talk about it. Nazi crimes hardly found mention in public discourse in the early 1950s.

Thus the Ulm trial in 1958 marked the reopening of criminal proceedings against Nazi criminals. It was seen as a sign that the West German judicial system was taking the Nazi past more seriously. But the most striking thing about the Ulm trial was that it made clear that Nazi atrocities were not just committed within the Third Reich but largely in Eastern Europe.

The 10 defendants in the Ulm trial stood accused of murdering more than 5,000 Jewish men, women and children. Who were these men? Were they cold-blooded killers or just "ordinary men"?

No, they certainly weren't average Germans. They were members of the Gestapo in Tilsit [Editor's note: the now Russian town of Sovetsk] on the northeastern tip of the Third Reich, some were even long-time SS members. They were largely career policemen, people who usually joined the crime force and then went on to join the Gestapo during the 1930s. Usually the leading personnel involved die-hard Nazis -- people who joined the NSDAP relatively early, actively supported the Nazi ideology and cracked down on the opponents of the ideology. 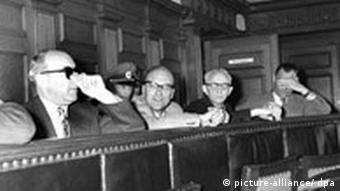 In the dock -- some of the defendants in the Ulm trial

Right after the Wehrmacht's invasion of the Soviet Union on June 22, 1941, the Gestapo Tilsit followed with small commandos, entered western Lithuanian territory and began shooting Jews. This was where the first mass murder of Jews in the so-called "Final Solution" took place on June 24, 1941, just two days after the beginning of the German campaign in the town of Garsden. The commandos largely targeted young Jewish men old enough to join the army; women and children were only killed in exceptions. The crimes set the stage for what followed in the entire occupied Soviet Union over the next two years -- large massacres of Jewish communities with all the brutalities that went with it.

How did the Ulm trial come about?

Actually due to sheer coincidence. One of the main defendants, Bernhard Fischer-Schweder, the police chief in Memel, Lithuania, in 1941 and involved in the murder of thousands of Jews, assumed a false name after 1945 and was appointed director of a refugee shelter near Ulm in 1955. He was fired when his past came to light. When he was refused another public sector job, Fischer-Schweder filed a lawsuit in a labor court. A survivor of Fischer-Schweder's murderous campaign in Lithuania came across a newspaper article about the court case and identified him, revealing details about his past. That provided the trigger for the trial.

Unfortunately, most cases against Nazi criminals at the time came into being this way. A surviving victim usually happened to discover a perpetrator and then filed a lawsuit against him.

What kind of an atmosphere did the trial take place in? How was it viewed by the West Germans and the justice system?

The trial came at a time when much of the German population simply wanted to draw a line under the past. After several years of Allied rule and a constant focus on the Nazi past, most people simply didn't want to hear about it anymore. The judicial system in Germany was partly shocked to see that severely incriminated perpetrators of Nazi crimes had managed to get away without facing any criminal proceedings. It was largely the then state prosecutor of Baden-Wuerttemberg, Erwin Schuele, who personally fought for the trial to take place. 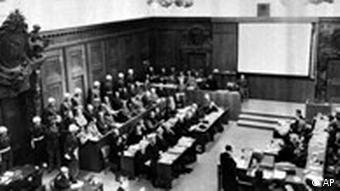 The Nuremberg war crimes trials in 1945 are well known

But at the same time, Germany's judicial system in the 1950s wasn't particularly interested in pursuing Nazi crimes. That had partly to do with the Nazi-weary mentality of the time. Another major reason for the reluctance to crack down on Nazi abuses was that there were quite a few lawyers and state prosecutors who had previously been members of the Nazi party. The presence of so many former Nazis in the German judicial system gathered force in the 1950s, because many who underwent denazification and were dismissed from public service earlier reentered the system in the early 1950s.

Yet Ulm did command immense media attention in the Federal Republic of Germany. It wasn't the first trial of its kind but it was certainly the most elaborate and most publicized of the time. Usually, with the exception of the big Nazi war crime trials in Allied tribunals, only a few regional and local papers reported about such cases. In the 1950s especially, such trials hardly sparked any nationwide attention.

The defendants in the Ulm trial were given relatively light prison sentences of between three and 15 years. Why was that?

The main problem that plagued all Nazi war crime trials right up to the 1980s was the development of the so-called "accessory to murder" construct. Normally, a murderer is punished with a life sentence. But most of the courts accepted that the main perpetrators of the mass murder of Jews were the Nazi leadership -- Hitler, Himmler and others. All the others were thus not considered murderers who killed Jews out of a deep sense of personal motivation but rather simply helpers who aided in the crime. That's why the majority of Nazi criminals were sentenced for being an accessory to murder. It was only in cases where it could be proven that someone had committed crimes out of a sense of personal conviction that a life sentence was issued. This strategy was strongly criticized in the 1960s and also proved to be wrong, because the courts were largely dealing with committed Nazis and anti-Semites.

Another reason was that it was difficult to reconstruct crimes committed 10 or 12 years previously and build up cases with the help of eye witnesses that would eventually lead to court proceedings. But the biggest problem was that the majority of the German population was simply not interested in tackling the past, and the authorities lacked the will to pursue people who committed atrocities under the Nazis.

How were the sentences received in Germany and abroad?

There was certainly a resonance in the US and in Israel, and I imagine there may have been some disappointments, particularly among Jews. In Germany, reaction was divided because a liberal segment in society was deeply interested in the trial in the late 1950s and followed it critically. But the majority of the German population at the time simply didn't want anything to do with it. It's true, the sentences in the Ulm trial were very light. There is hardly any person accused of crimes under the Nazis who served out the entirety of the sentence issued in the Federal Republic of Germany.

What effect did the Ulm Einsatzgruppen trial have on West Germany's efforts to bring Nazi war criminals to justice?

One of the most important and immediate political fall-outs of the Ulm trial was that justice ministers in West Germany, spurred on by the realization that many grave Nazi crimes in Eastern Europe were left uninvestigated, completely reversed the existing investigation procedure. They no longer relied on coincidences to bring Nazi crimes to light but rather on systematically investigating them. That was the immediate trigger for the establishment of a unique central authority in Ludwigsburg to compile, coordinate and investigate all types of crimes committed under the Nazis.

Beyond that, the Ulm trial was only a brief shock for the German population. The real jolt came with the Adolf Eichmann arrest and trial and the Auschwitz trial in Frankfurt in 1963. The general awareness in the German population that most Nazi crimes were committed in Eastern Europe and that the murderers live among us in society only sank in later.

On the anniversary of ceremonial Nazi book burnings, Germany is hosting a series of events to commemorate those whose works were destroyed. (10.05.2008)

The last surviving participant in the July 20 plot against Hitler has died at age 90. Former army officer Philipp Freiherr von Boeselager provided the explosives for the unsuccessful attack on the German leader. (02.05.2008)