Crates holding 50,000 new banknotes have arrived in Venezuela amid a currency crisis and growing social unrest. A delay last week, which President Nicolas Maduro blamed on the US Treasury, had sparked protests. 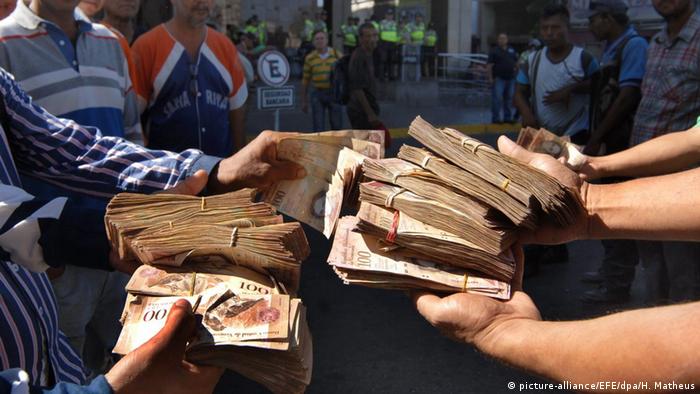 An airplane filled with new currency arrived in Venezuela on Sunday after the government briefly pulled the largest-denomination 100-bolivar banknote out of circulation earlier this week, a move that prompted protests and looting across the South American country.

An opposition leader has blamed the government for not releasing political prisoners and allowing a referendum on the presidency as a ploy to avert change. But the ruling Socialists also expressed concern that the talks had gone nowhere. (07.12.2016)

"There are 272 crates of 50,000 500-bolivar bills," said Jose Khan of Venezuela's Central Bank, who was at the airport to welcome the aircraft. Sweden made the new 500-bolivar denomination, according to the bank.

Venezuelan President Nicolas Maduro blamed "US Treasury Department sabotage" for delaying the new denomination from arriving when the 100-bolivar, worth approximately $0.03 (0.03 euros), was pulled from circulation on Friday.

"The 500-bolivar bills should have arrived on Thursday, but they arrived this Sunday. They could not stop us, they delayed them for four days," Maduro said.

The move to eliminate the 100-bolivar note prompted social unrest across the South American country, which has the world's highest inflation rate.

According to Bolivar Governor Francisco Rangel Gomez, at least one person was killed and 262 others detained as 3,200 soldiers were deployed to "restore order."

Opposition lawmakers have lashed out at Maduro's economic policy, which has seen the oil-rich economy descend into a recession after the collapse of petrol prices.

"We have a government utterly stupid and destructive in economic managements, whose only goal is to keep power at whatever price," opposition leader Julio Borges told the Reuters news agency.

The government has closed its borders with Brazil and Colombia, citing criminal organizations who allegedly hoard bolivars.

However, the opposition has criticized the move, saying it is unlikely gangs are holding their monetary resources in the currency of a country with the world's highest inflation rate.

As a result of the recession, Venezuela has witnessed acute shortages of basic amenities, including food products and medical supplies.