Netanyahu: 'Hamas leaves us no choice'

After eight days of clashes and nearly 200 deaths in the Gaza Strip, Israel has reported its first casualty. Israel resumed airstrikes, a decision which it blames on Hamas for not agreeing to uphold a ceasefire. 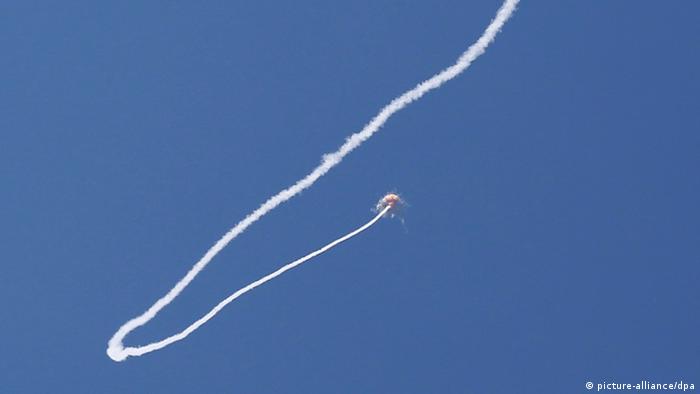 An Israel civilian was killed close to the border with Gaza on Tuesday when mortar fire hit the Erez crossing. The man had been delivering food to soldiers, according to Israeli emergency services.

The death was Israel's first since the country launched an aerial offensive against Hamas militants eight days ago in response to continued rocket attacks. Since then, Israeli airstrikes have claimed over 190 Palestinian lives, including at least two more on Tuesday.

"It would have been preferable to have solved this diplomatically, and this is what we tried to do," Israeli Prime Minister Benjamin Netanyahu said.

Just before 9 a.m. local time (0600 UTC), the Israeli Cabinet had agreed to an Egyptian-brokered ceasefire, according to which fighting between the two sides would have been brought to a complete halt by 9 p.m.

However, Hamas' militant wing – Ezzedine al-Qassam Brigades – equated the Egyptian-brokered plan to an act of submission which they rejected "outright."

"Hamas leaves us no choice but to expand and intensify the campaign against it," Netanyahu said.

"We will continue to hit Hamas until there is quiet for the citizens of Israel," he added.

German Foreign Minister Frank-Walter Steinmeier visited the region on Tuesday, meeting first with Palestinian President Mahmoud Abbas in Ramallah and then with the Israeli premier.

Speaking in Tel Aviv, he urged both sides to resume diplomatic efforts.

"The ceasefire wouldn't just be a chance to breath, but also perhaps the only chance for discussion," Steinmeier said.

"We should use this momentum," he said, referring to the Egyptian-brokered truce.

The massive daily exchange of rocket fire has raised concern in the international community. Earlier this week, the United Nations Security Council urged both Israel and Hamas to restore calm.

It’s been labelled a unique innovation, a strategic asset and a savior. But there's also a sense of complacency creeping in on the streets of Tel Aviv and Jerusalem about Israel's iron dome defense system. (15.07.2014)