The first-ever winter scaling of K2 in Pakistan goes to 10 Nepalese Sherpas. The world's second-highest peak, known as the "savage mountain," ranks as more dangerous than Everest. 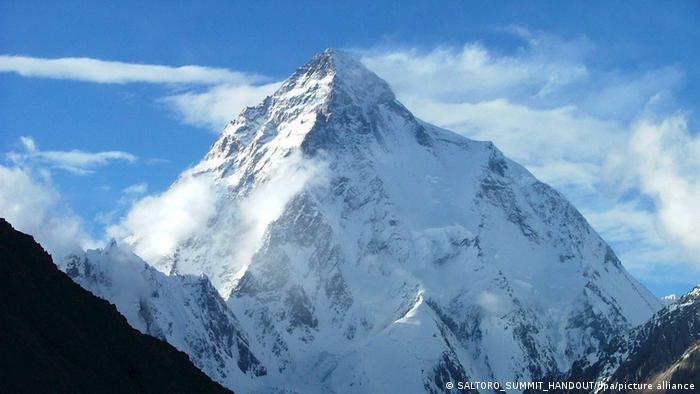 The first-ever winter ascent to the summit of K2, known as Pakistan's "savage mountain" and the world's second-highest peak, has been claimed by 10 Nepalese mountaineers.

"We did it," a trekking firm tweeted.

"A team of 10 Nepalese Sherpas has scaled the K2 this afternoon," said Karrar Haideri, of the Alpine Club of Pakistan. "This was never done by anyone before in winter," Haideri added.

On Facebook, Nirmal Purja, one of the triumphant mountaineers, described "a very special moment."

"The whole team waited 10m below the summit to form a group then stepped onto the summit together whilst singing our Nepalese National Anthem," Purja wrote.

K2 has a dreaded "bottleneck," a narrow, steep passage, where in August 2008, an avalanche killed 11 climbers in the peak's worst known tragedy.

On it, winds can blow at more than 200 kilometers per hour (125 miles per hour) and temperatures can drop to minus 60 degrees Celsius (minus 76 Fahrenheit).

K2 lies at the western end of the Himalayas, in Pakistan's Gilgit-Baltistan region that has 18 of the world's highest 50 peaks.

Since the maiden attempt back in 1988, just a handful of winter expeditions had been attempted until Saturday.

Where others fear to tread -- Anja Blacha

Peter Hillary: 'My father would have sighed' at Mount Everest mess

Nirmal Purja has conquered the world’s 14 highest peaks in the space of just six months. The Nepalese mountain climber pushed the boundaries of what is possible thanks to a strong team, bottled oxygen and determination.