Nepal's Maoist PM has resigned as part of a deal with his coalition partner less than a month before final local polls. The focus on forming a new government may distract from preparations for local elections. 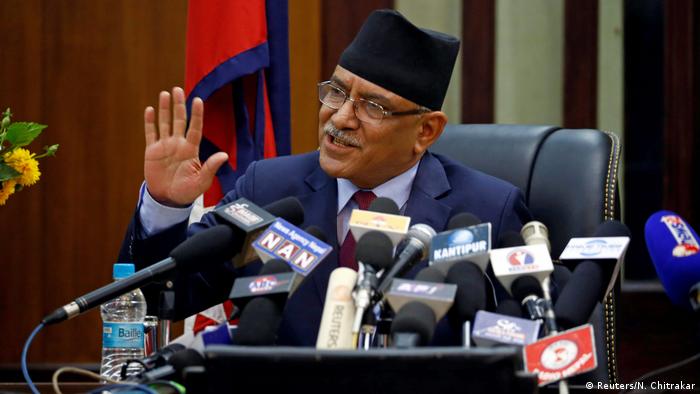 Nepal's Pushpa Kamal Dahal highlighted his government's achievements as he announced his resignation.

Nepal's Maoist prime minister resigned on Wednesday in line with an agreement with his coalition partner, casting doubt over the future of second round elections scheduled for next month.

Pushpa Kamal Dahal, who led a 10-year Maoist insurgency until a peace agreement was reached in 2006, came to power in August after making a deal with the center-right Nepali Congress party, the largest in parliament.

Under the deal, Dahal agreed to hand over power to three-time former prime minister Sher Bahadur Deuba after nine-months.

"I announce my resignation from the post of the prime minister today, right now, with a pledge to continue being active for the upliftment of the country and the people as a politician, parliamentarian and a citizen," Dahal said in a televised address.

Under Dahal, the first local elections in 20 years were held on May 14 in three of seven provinces. The results have still not been announced.

But he split the polls into two phases due to resistance from the Madhesi minority, who have vowed a boycott unless their grievances are addressed through amendments to the constitution.

The second vote is scheduled for June 14, but analysts question whether a new government will be able to pass the constitutional amendments in time or have enough time to prepare for second round elections.

"The resignation creates confusion about the polls because the focus will now be more on government making than elections," said Guna Raj Luintel, editor of the "Nagarik" daily.

The new government, the 25th in the 27 years, would be responsible for holding second round elections and national elections scheduled for early next year.

A team of rescuers has discovered the bodies of four climbers, believed to be two Sherpas and two foreigners, at the highest camp on Mount Everest. The rescuers were recovering a body of a climber who had died earlier. (24.05.2017)

Maina Sunuwar was tortured and murdered after her mother denounced government soldiers during Nepal's decade-long civil war. It's only the second time that Nepal has convicted people over civil war crimes. (18.04.2017)