Nepal elects former Maoist chief as prime minister | Asia | An in-depth look at news from across the continent | DW | 03.08.2016

Pushpa Kamal Dahal, who led a years-long Maoist insurgency, has taken over the top office for the second time. He now has wide support and a desire to talk, but can he still stop the revolving door of Nepalese politics? 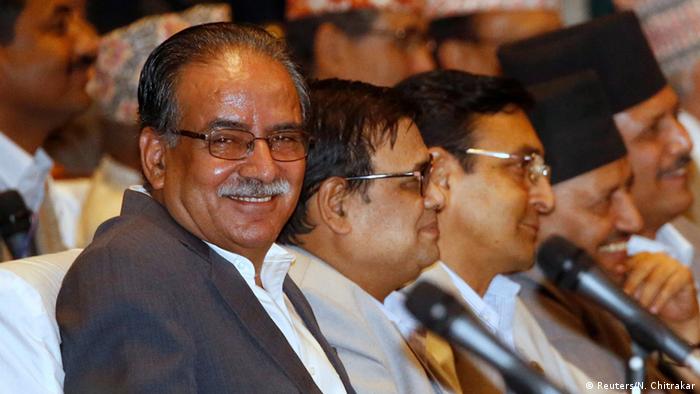 His election was expected, as the 61-year-old Dahal, who still goes by his nom de guerre Prachanda ("the fierce one"), was the only candidate running for the office. The Nepali Congress, the largest parliamentary party, earlier pledged their support for him as prime minister.

"I will work for national unity, to promote the interest of the country and its people," Dahal pledged to lawmakers earlier. He was draped with Buddhist prayer scarves after he was elected as leader of the deeply impoverished country of 28 million.

Dahal led a decade-long Maoist insurgency from 1996 that left over 15,000 dead and ended in a 2006 peace deal that led to the downfall of Nepal's Hindu monarchy. The Unified Maoist party joined mainstream politics in 2008. That August, Dahal was elected as the country's first prime minister.

He was, however, forced to step down in May 2009 following an attempt to sack the country's army chief. There was a disagreement over incorporating former Maoist fighters into the armed forces.

The Maoist party, the third largest in the legislature, and the Nepali Congress were partners in the coalition government under Prime Minister KP Sharma Oli. They launched together the motion of no confidence against Oli in June, a contest that the prime minister was expected to lose. He resigned on July 24 shortly before the vote. 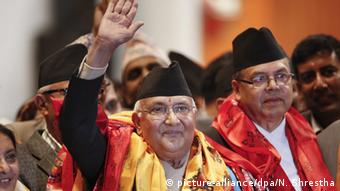 "The opposition parties hatched a conspiracy for narrow interests, and I am stunned by that," Oli said as he stepped down. He warned about that the move was a threat to the country's political stability.

Dahal is Nepal's eighth prime minister in eight years and the 24th since the country established multi-party democracy in 1990.

But George Varughese, Nepal country representative for The Asia Foundation, believes the country's prospects for stability will improve with Dahal in power. "His pragmatism is going to help diffuse the tense political situation prevailing in the country," he said.

A power-sharing deal was reported between the Maoists and the Nepali Congress, whose leader Sher Bahadur Deuba is expected to take over as prime minister before general elections to be held at the start of 2018.

Given their history, the two parties are strange bedfellows. Deuba headed a cabinet that put a bounty of 5 million rupees ($50,000) on Dahal in 2001. Maoist guerillas shot up Deuba's convey two years later.

The Maoist party withdrew its support of Oli's government after accusing him of failing to implement an earlier deal to withdraw war cases from Nepal's courts and holding him responsible for unrest in the country since it adopted its constitution last September.

Much of this unrest has come from the country's Madhesi minority, which accuses the new constitution of dividing up its ancestral homeland when it decided upon state borders. Dahal intends to reach an agreement with the Madhesi. 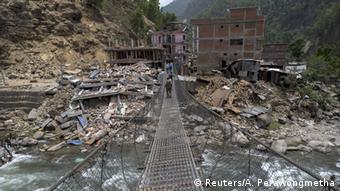 Nepal also has a tough balancing act to play with China and India, which are both vying for influence in the country. Varughese expects Dahal to work to "repair Nepal's relationship with India while at the same time maintaining a balanced relationship between India and China."

"Unlike the previous prime minister, he is more willing to sit and discuss and work towards reducing tensions and seeking practical solutions for various problems afflicting Nepal," Varughese told DW.

Among these issues is the country's huge - and so far slow - reconstruction effort in the aftermath of the earthquake last year that killed 9,000.

Protesters clash with riot police in Nepal over new constitution

Hundreds of demonstrators have fought with police in Nepal's capital, protesting against the government and the new constitution. Protesters led by the Madhesi minority group have demanded changes to the charter. (16.05.2016)

Nepal between reconstruction and conservation

The people of Nepal are still coping with the effects of the major April 2015 earthquake. Although reconciling reconstruction and environmental protection is challenging, forest committees are helping. (03.05.2016)

Nepal in political turmoil after PM calls for new elections 24.12.2020

Nepal is staring at a constitutional crisis after PM KP Sharma Oli dissolved parliament in a bid to counter discord within the ruling party.

After Nepal's Parliament was dissolved, public health experts are concerned that political campaigns and protests will spread the coronavirus even further.