The Golden State Warriors clinched their fourth NBA title in eight seasons after a commanding 103-90 Game 6 victory over the Boston Celtics. MVP Stephen Curry led the way with 34 points in the decisive game. 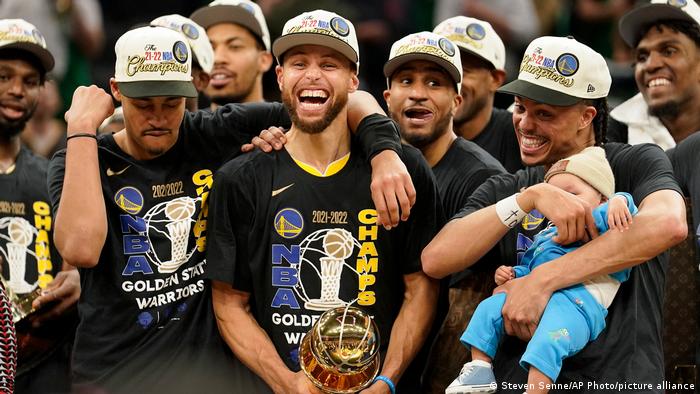 The Golden State Warriors are NBA champions once again, topping the Boston Celtics 103-90 on Thursday night for their fourth title in the last eight seasons.

Stephen Curry, who earned his first Finals Most Valuable Player (MVP) award, dominated for the visiting Warriors on the night, draining 34 points, alongside seven assists and seven rebounds.

The 4-2 series win, having twice trailed in the best-of-seven Finals, earned the Warriors their seventh overall championship. It sees them break their tie with the Chicago Bulls and take sole possession of third place in the all-time winners' list — trailing only the Celtics and Los Angeles Lakers, who both reign supreme with 17 titles.

"I'm so proud of our group," Curry said following the win. "At the beginning of the season, nobody thought we would be here except everybody on this court.

"We hit rock bottom with injuries and the long road of work ahead and trying to fill in the right pieces and the right guys. You can't ever take this for granted because you never know when you're going to get back here."

Between 2015 and 2019, the Warriors had reached five consecutive Finals but they lost their key player shooting guard Klay Thompson for two years when he tore his ACL during Game 6 of the 2019 Finals.

The following year, Steve Kerr's side finished with an NBA-worst of 15 wins in the pandemic-shortened 2020 season and, after failing to also reach the playoffs in 2021, some thought it was time to break up the team.

But despite some occasional wayward shooting, Thompson delivered in this year's Finals, draining some impressive three-pointers and standing tall on defense against a younger, more athletic Boston squad.

"Two years of watching my teammates was hard," Thompson said.

"A 15-50 season (in 2020). And then to not be out there with Steph and Draymond [Green] and the guys the next year was even tougher. So to be back at this point, I'm not going to lie, I knew it was possible but I just can't believe it's here."