One of Picasso's most famous portraits, "Seated Woman in Blue Dress," has sold at auction for $45 million. During World War II, the painting was confiscated by the Nazis but rescued from a train by the French Resistance. 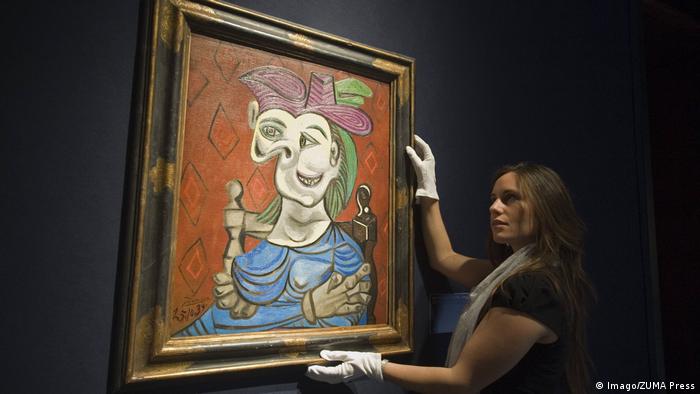 It depicts Picasso's lover Dora Maar, a photographer and artist in her own right who is also credited with being one of Picasso's most important muses.

Rescued from the Nazis

The artwork was originally owned by Picasso's friend and gallerist, Paul Rosenberg, but was confiscated by the Nazis in 1940 in occupied France.

Is Leon Löwentraut the new Picasso, or just a lifestyle product? Experts in Berlin are undecided, yet the media and collectors are crazy about him. Berlin adores such types, says DW columnist Gero Schliess. And why not? (09.04.2017)

The painting was en route to Germany when it was rescued by the French Resistance.

"By astounding coincidence, the work was discovered and rescued by Rosenberg's son, who led a mission to intercept a train carrying plundered art," states a Christie's essay on the painting.

The painting was later acquired by US industrialist, financier and art collector George David Thompson. Picasso's portrait of Dora Maar was valued pre-sale at $35-50 million.

Picasso holds the world record for the most expensive piece of art to be sold at auction. His "Les femmes d'Alger" (The Women of Algiers) sold for $179.4 million at Christie's in New York in 2015.

Monday evening's bidding kicked off a week of high-profile art auctions that are expected to bring in hundreds of millions of dollars.

At the end of Monday, Christie's said the evening sale of impressionist and modern art, including Chagall, Monet and Fernand Leger, fetched $289 million.

Much of the art being offered is fresh to the market - 84 percent of the works up for sale by Christie's have never been offered at auction or have been off the market for over 20 years.