Over 1,000 gnomes raising their right arms in a Hitler salute have taken over a square in a German town. The artist who made them says they're a warning about the manipulation of the masses inherent in fascist ideology. 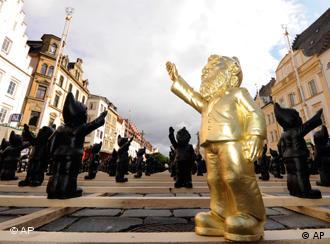 A collection of controversial garden gnomes, whose stubby right arms are raised in a Hitler salute, went on display in the Bavarian town of Straubing on Wednesday. The display, entitled "Poisoned," consists of 1,250 saluting gnomes arranged in rank and file. Most of the figures are black plastic, but about 20 are painted shiny gold.

"The fascist idea, the striving to manipulate people or dictate to people is latently dangerous and remains present in our society," said Hoerl, who is also a professor at the Academy of Fine Arts in Nuremberg. He said he had a serious point to make, namely to draw attention to the rise of the far right throughout Europe. This wasn't just a German issue, he said. There were neo-Nazis in other European countries as well.

Though he chose the Hitler salute, Hoerl said the exhibit was not only about terror from the right. The dangerous "Fuehrer Principle" also occurred in other dictatorial systems.

"I could have just as well used a Communist balled fist," he said.

Hoerl has already displayed his provocative gnomes in Belgium, Italy and two German art galleries. The exhibition in one Nuremberg gallery had sparked an enquiry this summer into whether the display should even be allowed. Hitler salutes and Nazi symbols have been illegal in Germany since the end of World War II. 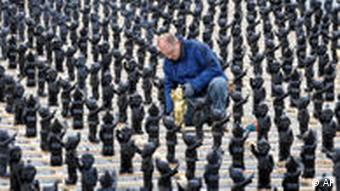 The gnomes will be guarded day and night

But prosecutors accepted the artist's argument that the 40-centimeter (15-inch) gnomes were satire ridiculing the Nazis, not promoting them.

The art installation, part of Hoerl's project "Dance with the Devil," will be officially inaugurated on Thursday and is the first public display of the gnomes in Germany. But it has already been the subject of heated debate in Straubing - much to the artist's pleasure. While Hoerl set up on Wednesday, passersby and a group of schoolchildren entered a heated debate about it.

"I didn't do the work in order to fail through indifference," the artist said about the reactions. "It is a work that is meant to get people to think, to react."

A guarded welcome in Straubing

The town itself has stressed that it would like the art to provoke critical discussion of Hitler's regime. However, Mayor Markus Pannermayr from the conservative Christian Social Union said he was distancing himself from the project. He said there were considerable reservations about the installation. 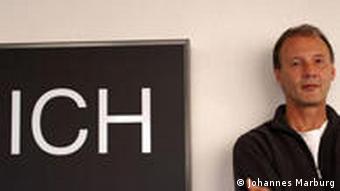 "Popular opinions appear to differ widely," Pannermayr said. But it wasn't the case that people did not want to concern themselves with right-wing extremism.

"It's the question whether this is the suitable form for debate," he said.

Straubing's culture committee had rejected presenting the project in the town's name. In addition to reservations with regards to content, the project would have cost 20,000 euros ($29,800). Ultimately, the town's Social Democrats commissioned the work.

The gnomes will be guarded around the clock during their sojourn in Straubing's main square, which runs until Monday. The gnomes are also for sale on Hoerl's website - priced at 45 euros or signed by Hoerl for 120 euros.

Despite protests from Jewish groups, the show did go on at last for a Fassbinder play that some had labeled anti-Semitic. The public gave the Germany premiere a warm reception. (02.10.2009)

YouTube has removed a controversial anti-AIDS video that mixes sex, AIDS and Hitler after critics slammed the spot as disgusting and inappropriate. (09.09.2009)