NATO's 28 foreign and defense are meeting in Brussels for a so-called jumbo meeting. The gathering will prepare the NATO summit in Chicago in May. The dominant issue will be Afghanistan. 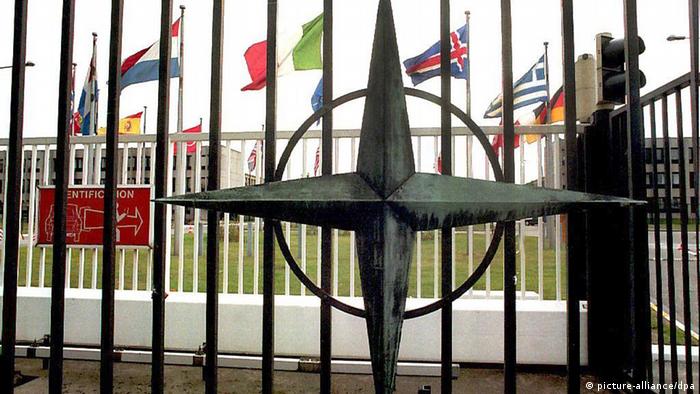 Public statements by NATO officials quickly swept aside last weekend's wave of coordinated attacks by the Taliban and other insurgents in Afghanistan.

NATO spokeswoman Oana Lungescu also praised the prompt and effective reaction by Afghan security forces. From NATO's point of view, the handling of the worst Taliban attacks in Kabul in 10 years was deemed a success. NATO diplomats, who asked to remain unnamed, however, said they did not share this optimism about the competence of the Afghan security forces. After all, the clashes last weekend were only ended with the support of US helicopter gunships.

"Clearly we still face security challenges," Lungescu said in Brussels. But the timetable for withdrawing NATO-led ISAF troops, which is on the agenda during the "jumbo" meeting in Brussels on April 18 and 19, will not be changed. German Foreign Minister Guido Westerwelle, who is expected to participate, said the plans to withdraw the 130,000 soldiers from Afghanistan would continue as planned.

NATO is in the process of handing over responsibility for security in several Afghan provinces to the commanders of the Afghan troops. Half of the territory is already under Afghan command. The handover is supposed to be completed by the middle of 2013. 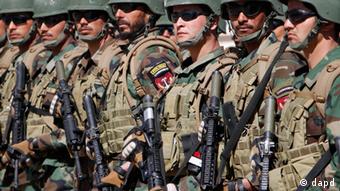 Thousands of Afghan special forces have already completed their training

By the end of 2014, most ISAF troops from 49 different nations will have left Afghanistan in line with a decision taken at the last NATO summit in November 2010 in Lisbon, Portugal.

The task now is to evaluate whether this timetable can be met. US President Barack Obama, in the midst of his reelection campaign, is expected to announce at the upcoming NATO summit in Chicago on May 20-21 how many US units will return home at what point in time.

NATO is training up to 350,000 Afghan soldiers and police. This number is supposed to decline after 2014 - presumably to a force of some 235,000. This week's "jumbo" meeting of foreign and defense ministers in Brussels will grapple with who will pay for this large security force in the future. NATO Secretary General Angers Fogh Rasmussen, who visited Afghan President Hamid Karzai last week, said he assumed that those ISAF nations providing troops would carry the costs. 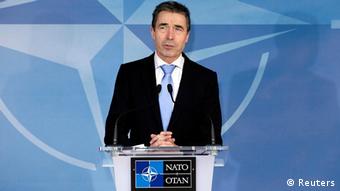 Rasmussen said NATO will not leave a "security vacuum" in Afghanistan

"NATO will also remain committed to Afghanistan after 2014," Rasmussen said. Estimates show that $4 billion (3.05 billion euros) are necessary to pay the soldiers and police forces in Afghanistan.

In addition, the ministers meeting in Brussels need to determine how to organize and coordinate the logistically complex withdrawal of 130,000 men and women with 70,000 vehicles through Pakistan and Central Asia.

"Presumably, it will be necessary to set up an own operation with its own mandate," former NATO General Egon Ramms told DW. "Germany is the regional power in the north and leads the Regional Command North. So we are responsible for certain logistical processes, support and supplies. That means that the Germans also need to attend to the withdrawal of the Norwegians, the Swedes and other countries."

Since Germany's Bundeswehr carries responsibility for the withdrawal of troops via one of the major routes, the country's 4,400 soldiers could remain on the ground there for a very long time. According to Ramms, troop levels may have to be raised temporarily because additional logistical specialists need to be sent to Afghanistan.

The 56 foreign and defense ministers in Brussels will also welcome guests from NATO partner countries - the most important being Russia's Foreign Minister Sergey Lavrov. He will be discussing the withdrawal from Afghanistan with the alliance in the NATO-Russia Council. Russia's cooperation is urgently needed, since many transports will roll across Russian territory. 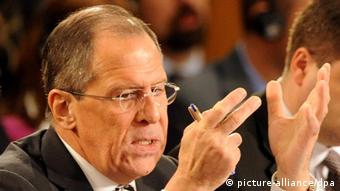 Another thorny issue will be the controversial missile defense system, which NATO wants to set up in Europe. Moscow largely objects to the plans whereas NATO wants to determine the preliminary operational readiness of parts of the shield during the summit in Chicago. According to NATO sources, Russia believes the defense shield will minimize its ability to block a nuclear attack. But the so-called second strike capability would not be affected by the shield, NATO has said.

Russia's current Prime Minister and President-elect Vladimir Putin reportedly cancelled his participation at the Chicago summit in protest of the missile defense plans. Officially, the Kremlin said Putin would only have been in office for a few days at that time and would have difficulties including it in his agenda.

Despite this setback, NATO diplomats in Brussels said the working relationship with Moscow was good. Russia maintains its own embassy at NATO headquarters and a few weeks ago NATO and Russian officers cooperated in a missile defense exercise on a simulation computer, playing through various scenarios of attacks on Europe. Twenty-two years after the end of the Cold War, the threat comes from risk nations like Iran or North Korea, who are difficult to assess. At least in this analysis, NATO representatives and Russia for the large part agree.

NATO is planning to withdraw its troops from Afghanistan by the end of 2014 - a date that will be extremely difficult to meet, as General Egon Ramms explained to DW. (13.04.2012)

Taliban attacks - the start of a spring offensive?

Experts refer to the recent string of Taliban attacks in Afghan province capitals as a new 'quality of terror and force.' Some wonder whether this was the beginning of a spring offensive. (16.04.2012)

Attacks show Afghan security forces have not 'learned their lesson'

In a series of coordinated attacks, the Afghan Taliban have demonstrated their strength and unwillingness to compromise. While comments from NATO have been positive, experts are less optimistic. (16.04.2012)