NATO Launches ″Distinguished Games″ | News and current affairs from Germany and around the world | DW | 07.08.2004

Athens is spending €1.2 billion for the Olympics most comprehensive security package, which includes a hefty contribution from NATO. Given the threat of terrorism, the investment in precaution is understandable. 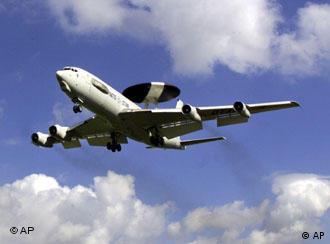 NATO has begun Operation "Distinguished Games" -- the first time the organization has played such a support role for a civilian event. Its operations include an intensive surveillance of the airspace over Greece, with around 10 Airborne Early Warning Aircraft (AWACS) taking it in shifts to circle over the eastern Mediterranean, searching for passenger planes or other aircraft that could be seized by terrorists.

Should the flying radar stations find a suspicious aircraft, the NATO command center in Larissa can send fighter jets from Greece or other NATO member states into the sky.

Patriot anti-aircraft missiles are also deployed around Athens. If a warning is ignored, shots may be fired -- but only if the Greek government gives the command. 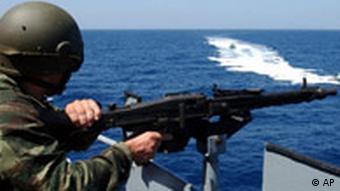 The Greek Navy patrols the coast, here near the Greek island of Hydra, southwest of Athens.

"NATO won't be taking action in response to any kind of a contingency," said NATO spokesman James Appathurai. "If our planes detect something, they'll inform the Greek authorities and it'll be for them to decide what to do and to do it, but not for NATO."

Test runs have shown that a crisis committee could give the green light for a launch within 20 minutes at the most. Around 12 NATO patrol boats and 35 boats belonging to the Greek Navy are cruising along the coast to protect the Olympic sports arenas from attack by ship.

A NATO "Anti-Terror Batallion" is stationed in the bathing resort of Halkida, 90 kilometers northeast of Athens. This will be the starting place for troops from Belgium, the Czech Republic, Hungary, Italy, Poland and Spain should there be a poison gas attack or some similar catastrophe.

"We will be forward-deploying elements of a chemical, biological, radiological and nuclear defense battalion, which will be there to help defend against any attack using weapons of mass destruction," Appathurai said.

The 200 NATO troops do not constitute a fighting force, and while security is the top priority, Appathurai is optimistic that the Games will pass without incident.

"We're quite confident that the Greek authorities have done everything humanly possible to provide for security, and we don't have any specific reason to believe there'll be a major attack at the Olympics," Appathurai said. "But you always have to be prepared."

Greece has invested €1.2 billion in security measures for the Olympic Games -- four times the amount spent in Sydney in 2000. A blimp is circling above Athens that can listen in on telephone conversations and detect chemicals. Every movement in the city is being observed by more than 1500 surveillance cameras. 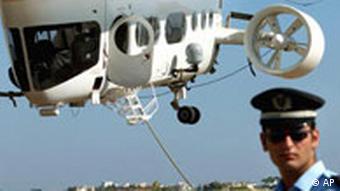 A police officer stands in front of a US-Swiss airship fitted with cameras and sensors to provide security at Olympics.

Greek Prime Minister Kostas Karamanlis is reportedly proud of this total surveillance but there's also been heavy criticism of the measures. Many Athenians are concerned that their civil liberties are being threatened. The International Olympic Committee though, says it expected nothing less.

"The security measures won't affect the mood of the Games, they are necessary," said IOC president Jacques Rogge. "I commend the Greek government for having done everything possible. That's what the world expects for something like the Olympic Games."

Athens goes into overtime as officials set up missile batteries, coordinate multinational troops and put the finishing touches on a security system that still has a few bugs, just ahead of the Games. (July 28, 2004)