NATO Agrees to Bolster Afghan Force and Talk Directly to Russia | Europe | News and current affairs from around the continent | DW | 03.12.2008

At a meeting of foreign ministers of NATO states in Brussels, the military alliance said it would commit more troops to Afghanistan. And that was just one of the issues on the agenda at a very busy conference.

NATO's rapproachement towards Russia was accepted but tensions remain

Emerging from the two-day meeting on Wednesday, December 4, German Foreign Minister Frank Walter Steinmeier told reporters that Germany would be willing to deploy more troops to deal with Taliban insurgents in the Hindukusch and elsewhere.

"I told ministers that there is still a lot to do," de Scheffer said on Tuesday at a press conference. "To prevent a stalemate -- a situation where we are not losing but also not winning -- we need more forces."

Steinmeier said that the German parliament had already demonstrated his country's commitment to NATO's International Security Assistance Force in Afghanistan by extending by the Bundeswehr's mandate for the mission from 3500 to 4500 soldiers. 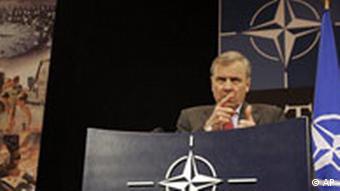 Scheffer said the alliance had to break the "stalemate"

But Steinmeier also said Germany, which is often reticent about deploying combat troops, was looking to bolster its involvement in civilian reconstruction projects in Afghanistan as well.

NATO Supreme Allied Commander in Europe, General John Craddock, has said an additional 20,000 troops beyond the 51,300 currently in Afghanistan will be needed to permanently defeat the Taliban.

US President-elect Barack Obama has repeated stated that his administration will make Afghanistan a top foreign-policy priority.

Lines of communication ready to be reopened 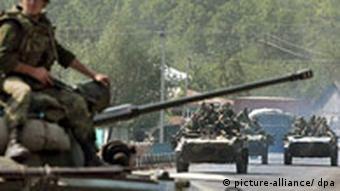 NATO had criticized Russia for using excessive force against Georgia

NATO could discuss with Russia a future security structure for Europe, but President Dmitry Medvedev must first clarify his plans - and NATO is in any case not going to dissolve itself, the head of the transatlantic alliance said.

"If the Russian president ... has proposals to make, and these should be a little bit more concrete, on a future European security structure, then I think the allies are ready to discuss those proposals," said NATO Secretary General Jaap de Hoop Scheffer.

But "there is not a shimmer of a chance that, in whatever discussion, NATO would be negotiated away," he added.

De Hoop Scheffer was speaking after a meeting in Brussels, in which NATO foreign ministers said they would be willing to discuss ways of responding to new security threats within the context of the Organization for Security and Cooperation in Europe (OSCE), of which Russia and the United States are members.

But in their joint statement, NATO ministers also called on Russia to refrain from issuing "confrontational statements" and stop being a source of concern for NATO's allies and its partners, for instance by threatening to deploy short range missiles in Kaliningrad.

"Allies are open to dialogue within the OSCE on security perceptions and how to respond to new threats, and seek the widest possible cooperation among participating states to promote a common Euro-Atlantic space of security and stability," ministers said.

At the same time, recent Russian actions and statements, including its "disproportionate" use of force during the August conflict with Georgia, have "seriously diminished our confidence in Moscow's continuing commitment to the founding values and principles of NATO- Russia relations."

Russia responded by saying it was ready to resume talks with NATO, Moscow's envoy said Wednesday.

"NATO has taken a step towards Russia and it would be irresponsible of us not to sit down at the table," Ambassador Dmitry Rogozin told reporters at NATO headquarters in Brussels. "The resumption of NATO relations with Russia is unconditional, which we can only applaud," he said.

In a communique after talks here, the foreign ministers "agreed on a measured and phased approach" for resuming the NATO-Russia Council, which meets at ambassadorial, ministerial and head of government levels.

"We have mandated the Secretary General (Jaap de Hoop Scheffer) to re-engage with Russia at the political level; agreed to informal discussions in the NRC," they said, and a full return once he reports back.

Rogozin said: "As we understand from the text of the final communique, Secretary General Scheffer now has the credentials to summon an informal NATO-Russia Council (NRC) meeting."

He added: "I personally do not see the difference between formal and informal sittings, except that you don't have coffee in an informal meeting but you still can order one."

Viktor Zavarzin, the speaker of the Russian Parliament, or Duma, also welcomed NATO's willingness to achieve a rapprochement.

"This is an indication that there is a growing understanding for Russia's role and for its international authority," said Zavarzin, who also chairs the Defense Committee.

Zavarzin also welcomed NATO's decision not to grant immediate Membership Action Plans to Georgia and Ukraine, saying that by sticking to its strict membership criteria, the alliance showed it had altered its assessment of the war.

The idea of holding a high-level meeting of the 56-member OSCE was first floated by French President Nicolas Sarkozy at last month's EU- Russia summit in Nice in Medvedev's presence.

Proponents of the OSCE summit, which could be held in the summer of 2009, say such a meeting could help address simmering mistrust between Russia and the rest of Europe.

Medvedev has long been calling for a "new security architecture" that would set legal limits on the use of force in the continent.

Such an international deal -- involving Europe, Canada and the United States -- would replace the Helsinki Final Accords of 1975, which laid the basis for peaceful relations between the Soviet Union and the West.

However, some analysts suggest Medvedev's main concern is to undermine NATO's sphere of influence in post-Cold War Europe.

De Hoop Scheffer, who was speaking with Georgian Foreign Minister Eka Tkeshelashvili by his side, asked, for instance, what Medvedev might mean when he calls for the notions of national sovereignty and territorial integrity to become legally binding.

Moscow now controls Georgia's separatist regions of South Ossetia and Abkhazia as a result of the August conflict.

Another issue raised by de Hoop Scheffer concerned the future of the Treaty on Conventional Armed Forces in Europe (CFE), which Russia has suspended in protest at US plans to create a missile-defense shield in Poland and the Czech Republic. The US plans have since prompted the Russian threat to deploy its own missiles in Kaliningrad, a Russian enclave surrounded by Poland, Lithuania and the Baltic Sea.

The comments made in Brussels on Wednesday followed Tuesday's decision by NATO foreign ministers to try and mend the rift with Moscow by inviting the alliance's chief to explore the possibility of resuming meetings of the NATO-Russia Council, a forum for direct dialogue which was suspended in the aftermath of the Georgia conflict. 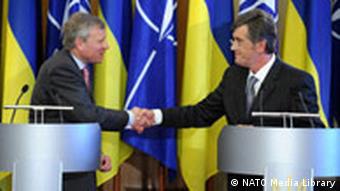 On the issue of the alliance's expansion further eastward, the foreign ministers walked a fine line.

They decided to increase cooperation between NATO and Georgia and Ukraine, both of which would like to become members. But the ministers stopped short of giving those two countries fast-track Membership Action Plans, or MAPs, something deeply opposed by Moscow.

Nonetheless, Georgia representatives said they had won a victory at the conference.

"We do feel very strongly that we are much closer to the ultimate goal which we have, which is the membership of this organisation," Georgian Foreign Minister Eka Tkeshelashvili said in Brussels.

At a NATO summit in Bucharest last April, NATO agreed that both Georgia and Ukraine would eventually become members but laid out no specific timetable for them to join the alliance.

Ukraine putting on a brave face

Meanwhile, Volodymyr Ohryzko, Ukraine's Minister of Foreign Affairs, tried to put the best face possible on NATO's refusal to invite Kiev to join any time soon, instead saying his government "had achieved everything we wanted."

"The result that we were working for: We have de facto received an action plan for the preparation of Ukraine to join NATO," he said.

Talks in Brussels earlier this week between the Atlantic alliance and Georgian and Ukrainian representatives produced an agreement stipulating either country might join NATO, but only after major and - in the short term at least - politically impossible domestic reforms.

The very formulation of an "action list" of conditions for Ukraine to try and meet in order to move towards NATO standards, however difficult and time-consuming, amounted to a substantial victory for Ukrainian diplomacy, and an indisputable first step toward Ukrainian membership in the treaty group, Ohryzko argued.

"Next year we will begin the NATO integration process," he said.

Ukraine's 2009 national budget would contain funding for beginning a conversion of Ukrainian military to NATO standards, as the Tuesday agreement with NATO was a legal treaty with the force of law inside Ukraine, Ohryzko added.

The Foreign Minister's remarks did not touch on the major hurdles for Ukraine's current pro-Europe government in pursuing its pro-NATO agenda, among them majority opposition by Ukrainian citizens to NATO membership, and weakening support across the country for the ruling pro-Europe government.

NATO Re-Opens Talks With Russia, Hold Off on Ukraine, Georgia

NATO and EU officials on Tuesday decided to rekindle the dialog with Russia after suspending it following Moscow's conflict with Georgia in the Caucasus. But they didn't have good news for Ukraine and Georgia. (02.12.2008)

At a meeting of NATO foreign ministers on Tuesday, issues like a membership plan for Ukraine and Georgia are on the agenda – as is the question of whether to thaw relations with Russia after its invasion of Georgia. (01.12.2008)

Despite intense lobbying, Georgia and Ukraine look certain not to be offered a fast track towards NATO membership at a meeting of alliance foreign ministers in Brussels on Tuesday, diplomats said. (01.12.2008)