Scientists hope the sample will offer insights to the origins of life and the solar system. If the spacecraft successfully returns to Earth, it will have collected the largest sample from space since the Apollo era. 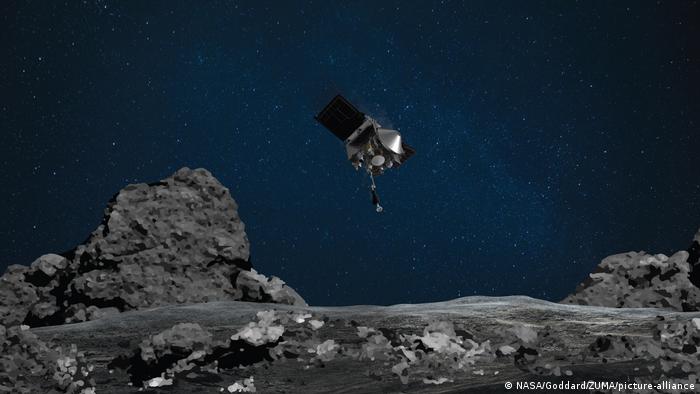 A NASA spacecraft on Tuesday conducted the US space agency's first sample collection from an asteroid as part of a seven-year journey.

The event, which lasted around 4.5 hours, saw the Osiris-Rex spacecraft extend its 11-foot (3.35 meter) robotic arm toward a flat patch of gravel near the north pole of the Bennu asteroid, and pluck the agency's first handful of pristine asteroid rocks.

"Sample collection is complete, and the back-away burn has executed," mission operator Estelle Church said seconds later, confirming that the spacecraft had eased away from Bennu after making contact.

The spacecraft, roughly the size of an SUV, descended steeply towards the asteroid, then navigated into an area the size of about three parking spaces and surrounded by large boulders.

Bennu, a black pile of rubble that is about 500 meters wide and 290 million kilometers (189 million miles) from Earth, could come dangerously close to the planet within the next century, although the chances of impact are extremely low.

"Everything went just exactly perfect," Dante Lauretta, Osiris-Rex principal investigator from the University of Arizona, Tucson, said. "We have overcome the amazing challenges that this asteroid has thrown at us, and the spacecraft appears to have operated flawlessly."

Clues to the origins of life

NASA hopes the 1-billion-dollar (€844 million) mission will reveal secrets about the origins of the solar system, as asteroids are remnants from that era, more than 4.5 billion years ago.

"We think we actually might be coming back with a baby picture of what the solar system was like, of what our chemistry was like billions of years ago," NASA astronomer Michelle Thaller said.

The spacecraft extended a robotic arm called Tagsam, which it used to touch the asteroid for about five seconds, eject pressurized nitrogen to stir up the surface and take a sample before gliding away. NASA hopes it will have secured between 60 and 2,000 grams of material.

The NASA team monitoring the operation on Earth saw the events with an 18.5-minute delay, roughly the time it takes light to travel that vast distance. The time lag did not allow for live command of the flight, so OSIRIS-REX conducted the procedure autonomously.

The probe is set to send back images of the sample collection on Wednesday and throughout the week so that scientists can examine exactly how much material was retrieved and determine whether the probe will need to make another collection attempt.

Read more: UAE plans to shoot for the moon

The spacecraft launched in 2016 from Kennedy Space Center for its journey to Bennu. It has been in orbit around the asteroid for nearly two years, preparing for the "touch and go" maneuver, also dubbed a "high-five" by some.

If it makes it home, the Osiris-Rex will have collected the largest sample returned from space since the Apollo era, when the first humans landed on the moon and brought rocks back from Earth's satellite.

If a successful collection is confirmed, the spacecraft will travel back toward Earth, arriving in 2023. Japan is the only other country to have already achieved such a journey.