NASA's Parker Solar Probe has blasted off from Cape Canaveral, Florida, embarking on a seven-year mission to examine the sun's atmosphere. A last-minute glitch on Saturday postponed the launch by 24 hours. 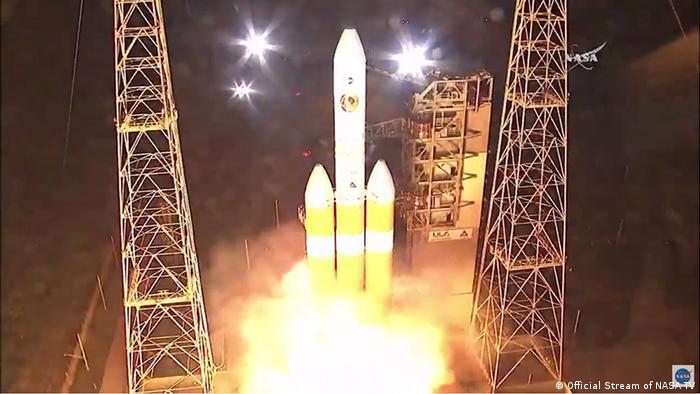 NASA's Parker Solar Probe blasted off from Cape Canaveral, Florida, on Sunday, marking the start of a historic mission towards the sun.

The spacecraft, about the size of a small car, is set to travel directly through the sun's atmosphere, making it the first probe to reach the sun's corona where temperatures exceed a million degrees Fahrenheit (555,000 degrees Celsius).

The probe was finally launched on top of a Delta IV Heavy rocket into the night sky at 3:31 am local time (07:31 UTC), after a last-minute technical glitch postponed the launch by 24 hours.

NASA has billed its latest mission as the first spacecraft to "touch the sun," although in reality will come to within 6 million kilometers (3.8 million miles) from the sun's surface. The distance between Earth and the sun is 93 million miles, meaning the Parker probe will get to within 4 percent of that distance.

NASA scientists hope the unmanned probe will allow them to explore the sun and unveil the mysteries of dangerous solar storms in a way never before possible.

The sun's solar winds and its corona, which is 300 times hotter than its surface, have the potential to wreak havoc on Earth by knocking out energy grids and wiping out power to millions of people.

"The Parker Solar Probe will help us do a much better job of predicting when a disturbance in the solar wind could hit Earth," said Justin Kasper, a project scientist and professor at the University of Michigan in the US.

Scientists also say that a deeper understanding of solar storms will help protect future deep space astronauts when they journey towards the moon or Mars.

The probe is armed with high-powered carbon heat shield that is 11.43 centimeters (4.5 inches) thick. The shield is also built to sustain solar radiation levels 500 times greater than those that reach Earth, while maintaining a relatively cool temperature inside of just 85 degrees Fahrenheit.

The Parker Solar Probe is expected to pass through the sun's corona 24 times over the next seven years.

"The sun is full of mysteries," said Nicky Fox, project scientist at the Johns Hopkins University Applied Physics Lab. "We are ready. We have the perfect payload. We know the questions we want to answer."

The Parker Solar Probe is set to break several NASA records over the course of its seven-year mission.

By this fall, on the probe's very first brush with the sun, it will already come to within 15.5 million miles from the sun's surface, easily beating the current record set by NASA's Helios 2 spacecraft in 1976.

Once it reaches its 22nd orbit around the sun, the Parker probe will be travelling at a record-breaking 430,000 miles per hour — faster than anything from Planet Earth has ever traveled before.

Among the thousands of people gathered at Cape Canaveral to witness the historic launch was 91-year-old Eugene Parker, after whom the spacecraft is named. Parker was the first person to propose the existence of solar winds back in 1958.

"I'm just waiting for the data now," Parker said in a NASA broadcast after the launch. "There will be a lot of data coming in. All I can say is 'Wow, here we go!'"