Mysterious object 'unlike anything' seen before, discovered in Milky Way

Australian astronomers have discovered a "spinning object" that releases bursts of energy in precise intervals. Researchers have said nothing like this has been seen before. 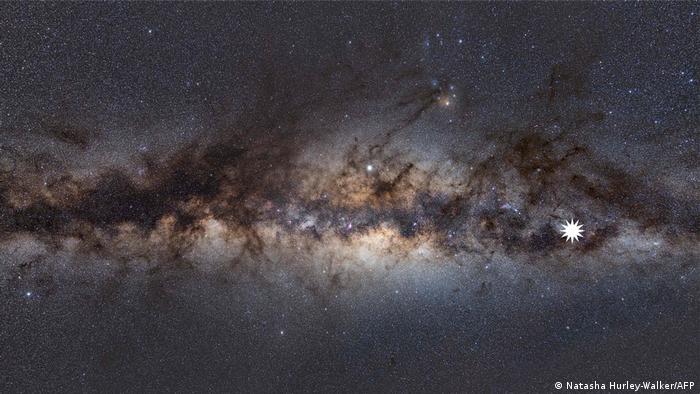 A team of researchers in Australia stumbled upon something of an astronomical mystery in the Milky Way.

University student Tyrone O'Doherty was working on his undergraduate thesis last year when he first spotted the mysterious object while mapping radio waves.

The object releases pulses of energy "every 18.18 minutes, like clockwork," according to astrophysicist Natasha Hurley-Walker, the team lead who followed up after the initial discovery was made.

"A team mapping radio waves has discovered something unusual that releases a giant burst of energy three times an hour, and it's unlike anything astronomers have seen before," the International Centre for Radio Astronomy Research (ICRAR) spread word of the discovery on Twitter on Thursday.

Object may be 'white dwarf'

The discovery was made using a low-frequency radio telescope known as the Murchison Widefield Array, situated in Australia's western Outback. Hurley-Walker said the object had been appearing and disappearing during periods of observation.

"That was completely unexpected. It was kind of spooky for an astronomer," Hurley-Walker said, "because there's nothing known in the sky that does that."

According to the team, the object may be a white dwarf — the core remnants of collapsed stars.

The object is understood to be around 4,000 light-years from Earth and has an incredibly strong magnetic field. News of the discovery has created a buzz in the scientific community.

Search is on for more

There is still much work that needs to be done to understand what exactly has been discovered.

"If you do all of the mathematics, you find that they shouldn't have enough power to produce these kinds of radio waves every 20 minutes," Hurley-Walker said. "It just shouldn't be possible."

The team leader did say that initially it was thought this may have been a signal from an alien life form. "I was concerned that it was aliens," Hurley-Walker said.

However, the signal was observed on various frequencies which according to Hurley-Walker, meant it was "a natural process" and "not an artificial signal."

The team's research has been published in the weekly scientific journal, Nature.

Stargazing in the Dark Sky Park in the Eifel