Myanmar′s civilian government takes charge | Asia | An in-depth look at news from across the continent | DW | 30.03.2016

For the first time in decades, Myanmar is governed by an elected civilian government. Suu Kyi's National League for Democracy is determined to change the political culture of the country, but it won't be easy. 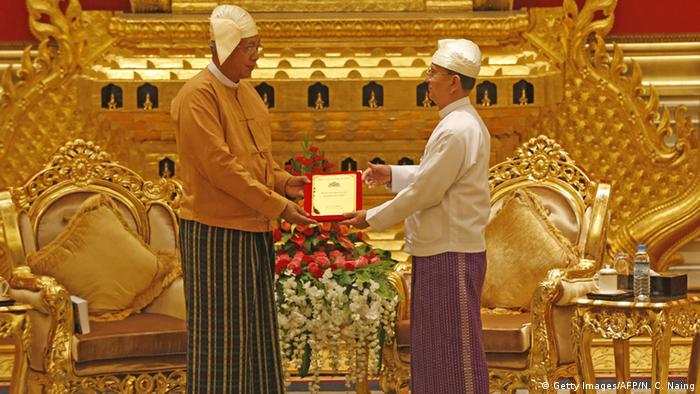 The transfer of power in Myanmar is finally over. The National League for Democracy (NLD), under the leadership of Nobel peace laureate Aung San Suu Kyi, had emerged victorious in the November 2015 elections, and on Wednesday, March 30, a new president, Htin Kyaw, officially took power from the former quasi-civilian government led by former general Thein Sein.

Kyaw, a close aide of Suu Kyi, was nominated by the NLD as the party leader. Suu Kyi was barred from holding the presidential office because her sons are British citizens, and the country's constitution does not allow citizens with foreign blood relations to run for president. However, Myanmar's democracy icon still holds the power, and Kyaw is expected to act as her "proxy," say observers.

With the new president now sworn in, his cabinet will soon meet and start running the country. 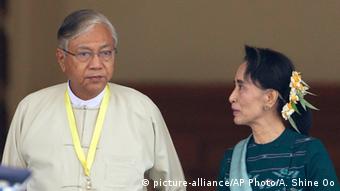 Burmese journalist Zeya Thu believes that people's expectations on the new government are very high. "People expect the civilian government to change the affairs of the country," Thu told DW.

Myanmar researcher Hans-Bernd Zoellner, who recently visited the Southeast Asian country, says that people do not have specific expectations from the government. "They just want everything to be reformed. The euophoria is not related to anything specific. The expectations are unreal," Zoellner told DW.

The Kyaw-led government first has to reform the entire administration, said Thu. "The administration needs people who can implement his policies," the journalist added.

In this regard, the reduction of ministerial posts from 36 to 21 was a good start. It gives the impression that the new government wants to tackle the issues and has a clear idea of how to go about it. The cabinet ministers have already taken oath, so they can start running the affairs.

The lady, her president, and the military

After decades of military dictatorship, Myanmar's parliament has elected a new president. While it may not be Aung San Suu Kyi, the election of her close aide Htin Kyaw has given the Burmese a reason for hope. (15.03.2016)

The swearing in of Htin Kyaw on Wednesday marks the final act of a political transition from military junta to civilian rule. The role will see him act as a proxy for pro-democracy figurehead Aung Sang Suu Kyi. (30.03.2016)

Myanmar has announced the candidates running for the presidency. While Aung San Suu Kyi's name is not on the list, a close confidant of hers will contest. But this is not a good idea, says DW's Rodion Ebbighausen. (10.03.2016)

It is now confirmed that Suu Kyi will act as a "super minister," dealing with four ministries, of which the foreign ministry is the most important one.

"I have long imagined Suu Kyi as foreign minister," said Thu. "She has already dominated foreign affairs for quite some time due to her international stature," Thu added.

Suu Kyi has made numerous foreign trips since 2010, which have taken her to Germany, Britain and China and the US.

Thu said that some names for the cabinet are not promising. "In some cases, I think that those who have made to the cabinet are there because of their loyalty to the party rather than their skills."

Suu Kyi probably feels that her supporters in the NLD, who endured years of imprisonment under the military rule, should be rewarded.

The three key ministries related to defense and border remain with the military. Thu says they are filled with younger army generals who are more familiar with democratic ideas than their predecessors. 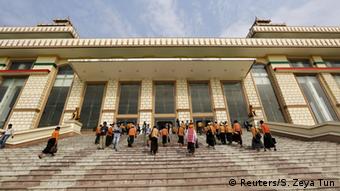 Tin Oo, the vice chairman of the NLD, announced Tuesday, March 29, that the new government would push for important changes within its first 100 days in office. But he was not very specific about what changes the government would introduce. Tin Oo also announced that the NLD wanted to build a federal state, initiate a process for national reconciliation, and consolidate democracy.

But the vagueness in Burmese politics is pretty common. The country's politics has more to do with symbolic gestures than concrete plans. People generally expect the whole country to change.

Suu Kyi wants to facilitate democratic culture in a country that has reeled under military dictatorship for decades to usher in a change from top to bottom. But Zoellner says it will take a century. "It is the society that has to change itself from the bottom," he said, adding that changing the entire political culture of the nation was going to be a huge task.