Demonstrators in Myanmar have taken to the streets against the country's new military junta for the third day in a row. The coup leader has defended the action in his first address. 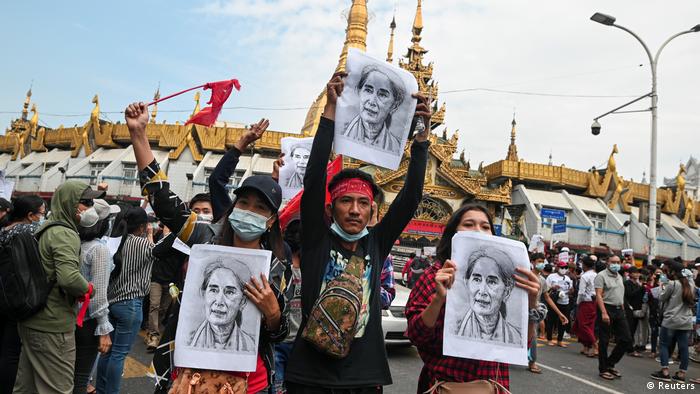 Tens of thousands of people gathered in the streets of Myanmar over the weekend for the biggest protests since the military putsch that removed Suu Kyi a week ago. The country found itself returned to military rule after a 10-year flirtation with democracy.

During a demonstration in the capital, Naypyidaw, authorities used water cannon against anti-coup protesters.

The AFP news agency reported that there were suspicions that the water had been laced with chemicals.

According to the Reuters news agency, police appeared to stop using the water cannon after protesters made and appeal to them. However, it said, the demonstration continued.

For the first time on Monday, state media referenced the protests, claiming they were endangering stability in Myanmar.

Later on Monday, state broadcaster MRTV issued a warning on a potential crackdown on protesters, saying that opposition to the military takeover was unlawful.

"Action must be taken according to the law with effective steps against offences which disturb, prevent and destroy the state's stability, public safety and the rule of law," said a statement read by an announcer on the channel.

Also on Monday, General Min Aung Hlaing said the ruling junta would hold a fresh election and hand power over to the winner, saying that campaigning in a vote last November had not been fair.

Speaking in a televised address, Min Aung Hlaing said the junta would form a "true and disciplined democracy," different to previous eras of military rule. He said the election committee must be reformed, and that it had used the coronavirus pandemic as an excuse to prevent fair campaigning.

The generals had earlier justified their takeover on the grounds of election fraud.

Experts have speculated that the vows to hold a new election, however, won't be enough to quell the protests.

'This is about everyone'

Yangon-based activist and filmmaker Lo Nay said that protests in other parts of the country have largely been taking place "peacefully."

While many people have worn red to the demonstrations to show support for Suu Kyi and her National league for Democracy (NLD), Lo Nay noted that the movement is about more than supporting Suu Kyi.

"There are a lot of especially younger people wearing black and blue shirts just to show that it's not just about one party and this is about everyone," Lo Nay told DW.

"It concerns everyone in the country and we want to show that this is civilians against [the] authoritarian military regime or government," he added. "One thing that we can see for sure is that there is a huge gap between the community and law enforcement officers."

Calls to join protests have grown louder and more organized since the coup last Monday, with the military shutting down social media channels being used by its opponents.

The "Civil Disobedience Movement" has gathered pace online, with the public urged to show their anger at the coup each night by banging pots and cymbals. Police have arrested individuals involved in such protests.

With the military junta periodically shutting down the Internet, protesters have had to turn to phone calls and text messages to organize the demonstrations.

"Right now, we are hoping the information flow stays the same because there are a lot of fake news and rumors running around. So we hope to reduce that and then get the correct information across [to] other people," Lo Nay said.

"They cut off all of our internet lines," Yoon Myat Thwe, a protester in Myanmar, told DW. "They cut off all the social media, Facebook an Twitter, and they want us not to spread the news that we are protesting against them."

"We want our democracy back and we want them to respect our vote and give us back our country's future," she added. Yoon Myat Thwe also alleged that the military was using prison inmates and hired individuals to cause violence at the protests.

The military justified the coup with a claim of fraud in last November's elections, which Suu Kyi's NLD won in a landslide.

The junta has proclaimed a state of emergency lasting a year and promised to then hold fresh elections — with no precise offer of a timeframe.