Those released included the elderly, people in ill health and drug offenders. Two Reuters journalists facing 14 years in prison for possessing secret official documents were not included in the amnesty. 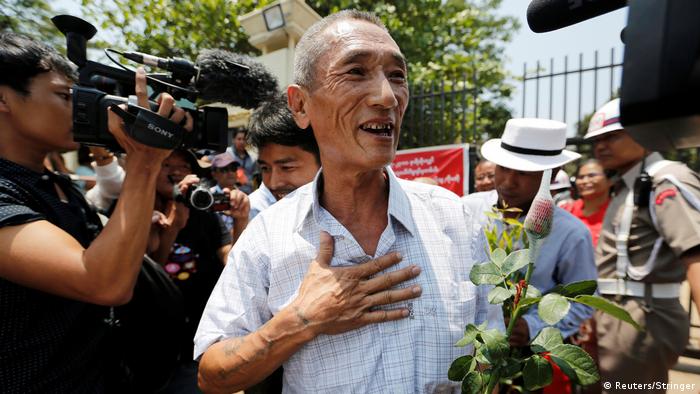 Myanmar on Monday announced an amnesty for more than 8,500 prisoners — including 51 foreigners and at least three dozen political prisoners. The action appeared to apply solely to convicted criminals rather than those waiting to be sentenced, suggesting the move is more of a presidential pardon than a blanket amnesty.

This was the first such action taken under President Win Myint, the proxy of National League for Democracy party leader Aung San Suu Kyi. The release of political prisoners was a priority for the party when it took over power from a military junta in 2016.

Suu Kyi said that releasing the remaining political prisoners was a top priority.

World in Progress: The fate of two imprisoned Reuters journalists

How many political prisoners are in Myanmar?

At the end of last month, there were 248. Fifty-four of those were serving sentences, 74 awaiting trial inside prison and 120 on bail, according to AAPP figures.

Who will not be released?

Two reporters from the international news organization Reuters facing trial for possessing secret official documents were not included in the amnesty because of ongoing legal proceedings. They had been arrested while reporting on a military crackdown in the northern Rakhine state which has prompted more than 660,000 Rohingya Muslims to flee to bordering Bangladesh and claimed around 6,700 lives. A pre-trial hearing in a Yangon court is scheduled for Friday. Wa Lone and Kyaw Soe Oo face up to 14 years in prison if convicted.

Aung San Suu Kyi holds the title of state counselor, a position created for Suu Kyi following the 2016 election. She is constitutionally barred from serving as president because her two children are British, as was her late husband.

The reporters were arrested earlier this month after receiving documents related to alleged atrocities in Rakhine state. Myanmar's security forces are accused of waging a violent campaign against the Rohingya minority. (27.12.2017)