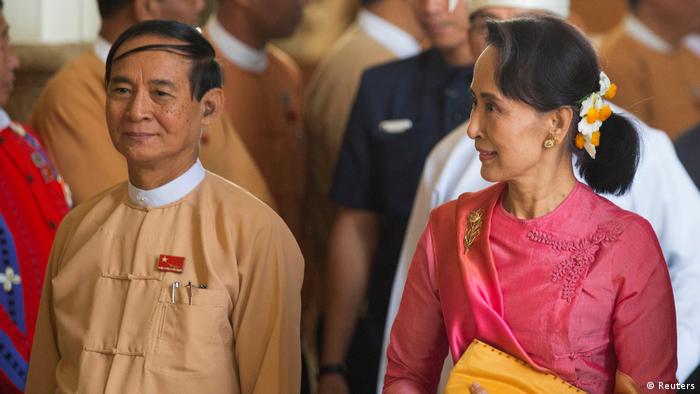 The 66-year-old ally of de facto leader Aung San Suu Kyi has been speaker of the lower house of parliament since 2016, shortly after the National League for Democracy (NLD) swept November elections the previous year.

Last week, Win Myint resigned as speaker of the lower house to become vice president. This paved the way for him to be elected president, who is chosen from three vice presidents by a sitting of both houses of parliament.

He won 403 votes from the 636 lawmakers in a vote largely split along NLD and military lines.

Myanmar's military ruled the country for nearly half a century until a partial transition to democracy in 2016. The military still controls security. Under the constitution, it maintains 25 percent of seats in parliament and three security positions in the Cabinet.

Read more:  The lady, her president, and the military

Both Win Myint and Htin Kyaw are close allies of Suu Kyi, who is barred from the presidency under 2008 military-drafted constitution. Instead, the Nobel laureate holds the title of state counselor, a position she has described as "above the president." She is also the chairperson of the NLD.

Win Myint enters the presidency as the country is under international pressure over allegations of ethnic cleansing of Rohingya Muslims. Suu Kyi apparent defense of the military's counterinsurgency campaign and rights abuses against Rohingya has tarnished the image of the pro-democracy leader.

Meanwhile, the civilian government has had difficulty implementing a national reconciliation project, with the military continuing fighting against multiple long-running insurgencies.

Speculation is rife that Win Myint may try to carve out more powers for himself, which is allowed under the constitution but effectively blocked by Suu Kyi.

However, Khin Zaw Win, the director of the Tampadipa Institute, a policy advocacy group, said the new president will remain under the control of Suu Kyi.

"To those who are asking, he will be forever Aung San Suu Kyi's henchman," he said. "I don't expect much change in the presidency, unless Win Myint puts the country's interests before Aung San Suu Kyi's and that of the military."

Who is Win Myint?

Win Myint was born in the Irrawaddy Delta in 1951. He studied geology in Yangoon before becoming a lawyer in the 1980s.

He joined the NLD when it was founded around pro-democracy protests in 1988. He had been jailed several times under military rule, including following the 1988 protests. His son died during his time in prison.

"I do not bear a grudge against the military, but I want my son with me on a day like this," he said after taking the position of speaker of parliament in March 2016.

In 1990, Win Myint won a seat in parliament for the NLD in an election that was quickly nullified by the military. He was also elected in 2012 and 2015.

He has been a member of the NLD central committee since 2010.

Myanmar: A tale of media, utopias and adventurous women