'My son was not depressed,' father of Germanwings co-pilot says

The father of Andreas Lubitz, the co-pilot who crashed a Germanwings plane in the French Alps, says his son was not depressed at the time of the disaster. Victims' families have criticized the timing of his announcement. 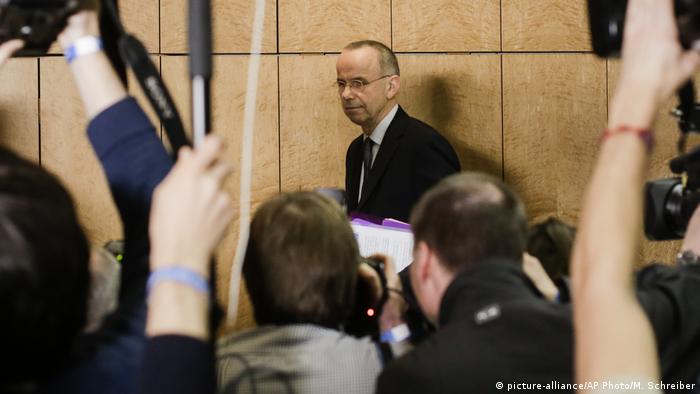 German prosecutors have closed their investigation into the plane crash in the Alps nearly two years ago. Co-pilot Andreas Lubitz deliberately crashed the plane, killing everyone on board. (09.01.2017)

Germanwings crash parents: 'We're being made to prove our grief'

Günter Lubitz used the second anniversary of the Germanwings disaster on Friday to dispute official findings that his son deliberately slammed the plane into the side of a mountain on March 24, 2015, killing all 150 people on board.

Prosecutors had concluded that Andreas Lubitz was struggling with depression at the time and bore sole responsibility for the tragedy. They believe the 27-year-old locked the captain out of the cockpit of the Airbus A320 from Barcelona to Düsseldorf before changing the flight's course.

"He was not depressed at the time of the crash," Lubitz senior, 63, told journalists during the press conference in Berlin.

Lubitz said his son had suffered from depression six years earlier, in 2009, but that he had overcome the illness and in the years before the crash had "been full of life." He added that doctors and psychologists who had seen his son in 2014 and 2015 had found no evidence of depression or suicidal thoughts.

At Friday's press event, Lubitz was flanked by journalist and aviation expert Tim van Beveren, who criticized the findings of the investigation and raised questions about the aircraft's airworthiness certificate. He also raised doubts about investigators' claims that Lubitz had locked the captain out of the cockpit.

"I was very surprised that the French investigators found the cause of the accident after just two days," he said.

The timing of the press conference, on the two year anniversary of the crash, angered victims' relatives, who were holding their own events to commemorate the tragedy.

Hundreds of people gathered at the western German town of Haltern am See, which lost 16 students and two teachers in the crash.

"We have not forgotten them and we will not forget them," headmaster of the Joseph König Gymnasium, Ulrich Wessel, said. "Their memory will stay with us always."

Five hundred people are expected to travel to the French Alpine town of Digne-les-Bains for an ecumenical church service.