The hopes of the German-Islam Conference were high when it was founded four years ago. But the Interior Ministry's exclusion of one German Muslim group has put the attendance of three of the group's partners in doubt. 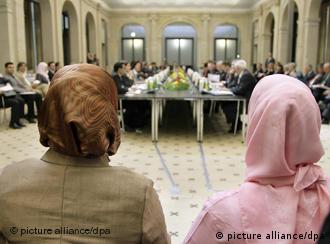 Germany's four largest Muslim associations debated a potential boycott of the German-Islam Conference in Cologne on Friday after the Interior Ministry excluded one of the groups from attendance.

The four groups were unable to reach a collective decision after nearly eight hours of discussion. Talks could though resume next Friday. 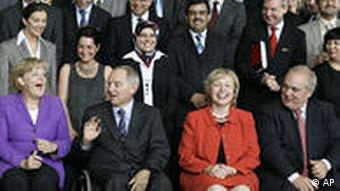 The conference has gained high-profile media coverage in Germany

"It was a very intense discussion - which proves the importance of this matter," spokesman Bekir Alboga told reporters after the meeting. "All options are still on the table."

The four groups were the Council of Islam; the Central Council of Muslims; Ditib, which constructs mosques for the Turkish Religious Affairs Ministry; and the Union of Islamic Cultural Centers.

The groups represent only five of the 30 members of the German-Islam Conference, with the remaining seats reserved for individual Muslims of various backgrounds and federal, state and local community representatives.

The meeting of the four groups came after German Interior Minister Thomas de Maiziere excluded the Council of Islam from the conference. The group is dominated by the fundamentalist Turkish-based Milli Gorus movement, which has been the subject of a federal criminal investigation. 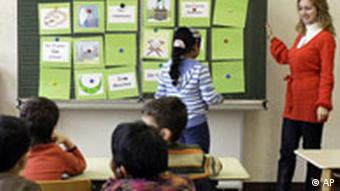 The conference has also discussed poor performance of Muslim students

The Interior Ministry claimed the investigation, which involves money laundering and fraudulent misuse of donations, would overshadow the goals of the conference. De Maiziere told German daily Sueddeutsche Zeitung the removal of the Council of Islam had "nothing to do with the other organizations," and that the rest were still "very welcome."

"If we want to advance the integration of Islam in Germany, then we have to speak with all the representatives of the Muslim community who are ready for discussion and have rejected violence," Koerting told German news agency dpa on Friday.

Koerting added that while he understood a desire to not sit down with people under criminal investigation, the rest of the 30,000 members of the Council of Islam should not be shut out while the investigation is still underway. 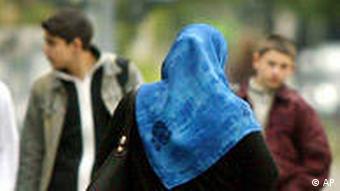 Many Muslims want racism and Islamophobia included in the agenda

The German government founded the German-Islam Conference in 2006 to provide an official platform to discuss Muslim integration in the country. Specific topics have included poverty, unemployment and the poor academic performance of Muslim children.

But critics, Muslim and non-Muslim alike, have questioned the conference's effectiveness. The months-long proceedings of the conference have suffered from sharp disagreements, including among Muslim participants, and results have been vague.

Only 20 percent of Germany's four million Muslims are actually represented by the four groups that participate, while the vast majority remains unaffiliated with any group.

Some Muslim participants have also complained of the conference's agenda, which has not focused on racism and Islamophobia. De Maiziere told Sueddeutsche Zeitung that these subjects "can certainly find a place."

This year's conference is scheduled for May 17.

Berlin wraps up its annual conference on Islam

As the annual Islamic conference in Berlin drew to a close, German Interior Minister Wolfgang Schaeuble said that, while there are still issues that need work, the conference was an overall success. (25.06.2009)